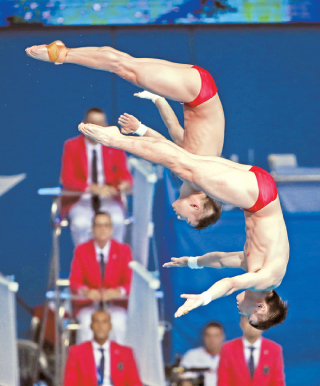 By receiving a score of 53.40 for their first dive, the pair ended the first round in second. But their second dive was given a score of 56.40, which was enough to push them into the lead. The Chinese pair went on to receive scores above 90 for their next three dives, allowing them to cruise to victory.

“I competed in the synchro springboard and now synchro platform at the Worlds,” Cao told FINA. “I need to get used to different events, different partners and different feelings in the air. I did not perform well in some dives because I made mistakes in the entry. I tried hard during training over the last two months. My goal is try to dive as perfect as possible.”

With the win, Cao became the first multi-medal winner at this year’s World Championships. Prior to Monday’s gold, Cao successfully defended his title in the men’s 3 meter synchronized springboard, partnering with Xie Siyi. With his second win, Cao has now won three golds, one silver and a bronze at World Championships. This is his first gold for the 10 meter synchronized diving event.

“We talked about our target before the final - we hoped to get over 500 points,” Chen told FINA. “We were very close to that. Next time, we should set our goal higher and maybe we have better results. It was the best performance I have had this year.”

Aleksandr Bondar and Viktor Minibaev of Russia picked up their second straight silver in the event with a score of 444.60, followed by Thomas Daley and Matthew Lee of Britain, who took home the bronze medal for their total score of 425.91.