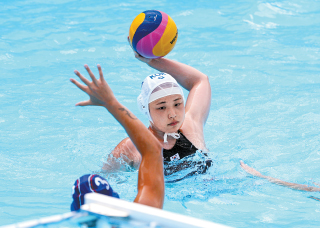 Next time you watch a women’s water polo game at the ongoing World Championships, keep your eye on the ball and squint hard at it.

It just may be the ball used for the very first goal by the Korean women’s water polo team.

Kyung Da-seul had the honor of putting the fledgling Korean team on the board against Russia during Group B action of the FINA World Championships on Tuesday. That Korea lost 30-1 almost seemed trivial in comparison.

The 18-year-old said afterward it would have been nice to have secured the ball as a keepsake, but amid the wild, emotional celebration the goal sparked, no one thought to ask for it.

“I’d love to have it, but I have no idea where it’s gone,” Kyung said. “It’s not like the ball has a name on it. I’d be grateful if someone found it for me.”

In different sports, balls for momentous occasions are stored away. Baseball players always keep the ball for their first professional hit or home run. In the case of homers, players are willing to trade in autographed bats or other items to get the ball from the fan who picked it up.

At the 2018 PyeongChang Winter Olympics, the puck for the first goal by the Korean women’s unified team was sent to the Hockey Hall of Fame in Toronto. After Randi Heesoo Griffin scored against Japan, Martin Hyun, deputy sport manager for hockey for PyeongChang’s organizing committee, had the presence of mind to ask referee Drahomira Fialova for the puck before it could be dropped for the face-off at center ice.

Unfortunately for Kyung, no one on the Korean team or other match officials did the same. In water polo, the clock stops after each goal, and since there are always extra balls on the sidelines in case the ball in use goes out of play, Korea could have asked for the ball from Kyung’s historic goal without interrupting the play.

The Korea Swimming Federation (KSF) didn’t ask for the ball, according to the organizing committee. An official from the KSF admitted that it’d be “difficult” to identify the ball now.

Instead of the game ball, Kyung received a personal gift from the referee from the game, Dion Willis of South Africa. Willis, who awarded Kyung the goal in the fourth quarter, gave her a key chain with a beaded South African flag.

While Kyung’s goal may not have quite the significance as Griffin’s goal for the joint Korean hockey team, it still generated plenty of media interest here.

Russia got three goals each from 10 different players, but journalists from that country didn’t stop any of them for sound bites in the mixed zone. Instead, they scrambled to find an English interpreter so they could interview the 18-year-old Korean. And Ryan Hanna Yoon, a Korean-American player who speaks fluent English, was also surrounded by international journalists, who tried to get her thoughts on the meaning of Kyung’s goal for the Korean team.