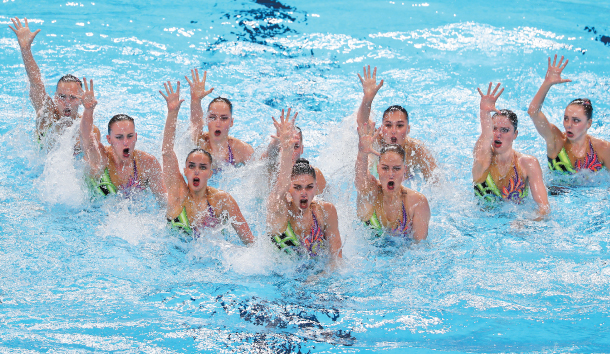 The Ukrainian team, which performed sixth out of the eight participating teams, held its lead until the end to pick up gold in the inaugural event. Team Ukraine received a total of 94.5000 points, 2.7667 points ahead of the silver medalists.

“Our team is really happy because of gold, it’s a fantastic feeling,” said Ukraine’s Marta Fiedina. “We really like this program because what we need to do is our highlight.”

Artistic swimming has long been dominated by Russia, but this is the only event that Russia did not compete in. Russia’s absence presented a rare opportunity for other countries to get into the artistic swimming medal table. Russia has dominated the sport so completely in recent years that since 2000, it has won every single Olympic gold medal available and 51 of the 60 available at the world titles between 1998 and 2017.

The team highlight routine is a new addition to the World Championships this year. Each team features 10 artistic swimmers and is given a routine time of two minutes and 30 seconds. Within the time, each team has to perform three required elements.

First, they need to include at least four acrobatic movements. Jumps, lifts, throws, stacks and platforms are all defined as acrobatic movements by FINA. Then, in their choreography, the teams are required to include a synchronized action that involves the athletes being intertwined or connected to each other. Lastly, the teams must have an action where they perform a floating synchronized move that from above looks like a kaleidoscope.

The highlight routine isn’t entirely new. It’s been around for years at some regional events, but it has never been included in the World Championships before and is often excluded from other competitions due to a lack of athletes. Its inclusion in the 2019 World Championships may also help to boost the event’s popularity.