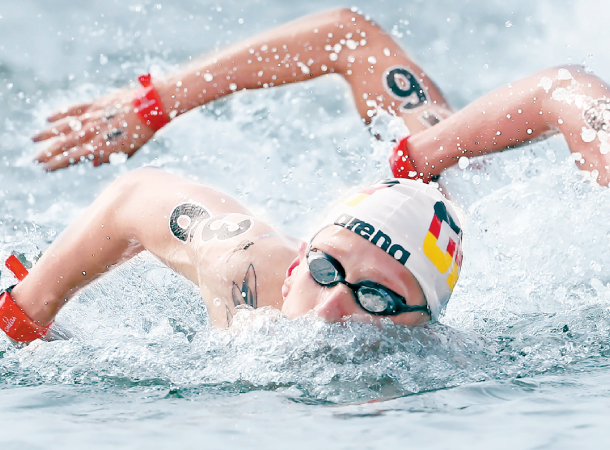 Florian Wellbrock of Germany swims in the men’s 10 kilometer open water swimming, which he won, at Yeosu EXPO Ocean Park on Tuesday. [YONHAP]

Wellbrock got off to a quick start by leading the race in the first split with a time of six minutes and 57.2 seconds. He dropped to sixth by the seventh split, falling a full 4 seconds behind the leader, but slowly made his way up toward the leading pack in the race. Reaching the 17th split, the second last split of the race, second, Wellbrock sprinted in the last section of the race to win by a slim 0.2 seconds ahead of a silver-medalist.

“There was no strategy or ‘key’ to today’s race for me. I love competing in open water swimming and I tried to be the best today,” Wellbrock told FINA. “I train with Rob [Muffels] and we have the same coach. I don’t think anyone likes to train alone. I believe that working together with Rob and also training at altitude helped both of us in today’s results. I admit that it’s a big and also a hard step to be on the podium next year in Tokyo, but with hard work it may be possible. I expect to race in the pool events in Tokyo the week before the marathon 10 kilometer. I know that I am too slow for the 400 meter freestyle but I will also race in the 800 meter and the 1500 meter pool events next summer.”

With a win, Wellbrock picked up his first gold at the World Championships and successfully qualified for the 2020 Tokyo Olympics. The top 10 finishers in the event earned their spots in the Olympics. Although there are seven medal events in open water swimming at the World Championships, only two events - men and women’s 10 kilometer open water - are the official events in Olympics.

The four swimmers - Olivier, Muffels, Weertman and Wilimovsky - will continue the World Championships in the mixed 5 kilometer relay, which starts tomorrow, Thursday. Wellbrock will not compete in the event.