Strategy for a weak WTO

Strategy for a weak WTO 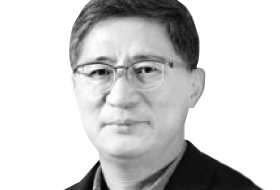 There used to be a sort of a manual in a government office on the subject of dealing with questions from the press. First, always flatly deny controversial reports. Then, after the heat has died down to some extent, officials must try to buy more time by leaking that the policy in question is in the review stage. “In the review stage” or “in consideration” was the textbook response by bureaucrats if a policy raised immediate public uproar.

After Tokyo announced it was slamming restrictions on Korea-bound shipments of key materials needed for chip and display production, Seoul vowed to take up the issue with the World Trade Organization (WTO). Some ruling party members claimed a sure win and “a just judgment” from the WTO on Japan’s export curbs in retaliation for hard-line actions by Korea on wartime labor issues.
But can the WTO solve everything?

Japan intends to capitalize on the changes in the global trade order. The trade order led by the multilateral WTO framework since 1995 has been shaken after the United States turned decisively self-centered — and protectionist — under President Donald Trump. An overhaul of the WTO was formally raised at the Group of 20 summit in Osaka, Japan last month. Multilateralism for more equality and balance in the global trade order has lost steam with the surge of bilateralism to better serve each country’s national interests.

Mindful of the protectionist trend, Japan ambushed Korea with silent condoning by the United States. It also watched how Seoul helplessly responded when Beijing launched economic retaliation for the installation of a U.S. antimissile system on Korean soil: it did not even attempt a WTO suit.

The WTO as an organization has become weak. The WTO dispute settlement process is undertaken by a panel of outside experts that studies the claims lodged by a member state and a settlement body which serves as a kind of an appeals court. The settlement body should be composed of seven judges sitting for four-year terms. But the body currently has only three sitting judges due to Washington’s persistent veto of nominees for the remaining four seats, the candidates being from Europe and the emerging economies. In December, the terms of two active judges, including an Indian national, will end. Then the dispute settlement body would become more dysfunctional with only one remaining judge on the board, from China.

Korea also has played a part in the WTO woes. Kim Hyun-chong, deputy director of the National Security Office under President Moon Jae-in, took the post of the appellate body — which became vacant after Korea’s first appellate body member Jang Seung-hwa finished his term — in late 2016. But Kim left the post after eight months to accept the Moon administration’s proposal to hire him as trade minister in July 2017. That gave the United States an excuse to put off a replacement process to fill the vacant posts. Kim also has broken the WTO code that advises panel members not to take up a government position for 90 days after leaving the appellate body. 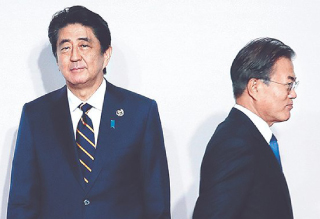 President Moon Jae-in, right, walks away after an eight-second handshake with Japanese Prime Minister Shinzo Abe at the Group of 20 summit in Osaka, Japan on June 28. [JOINT PRESS CORPS]

Even when the trade dispute between Seoul and Tokyo goes to the WTO, both governments are required to hold bilateral negotiations for up to 60 days. In bilateral framework, the tit-for-tat skills are important — a big difference with multilateral frameworks. That demands a practical and cool-headed attitude — not ideological claims — from Korea.

It must have a strong case to refute Japan’s claim that its action is not an export embargo but simply realignment of its export control regulations by removing its preferential treatment. In the worst case, Korea will look like a whining customer insisting on the discount after the sale period has ended at the shop.

Does the Blue House have a strong plan for bilateral negotiations with Japan? It must read well the changes in the global trade environment so it can draw up a better strategy — simply posing as a weaker party cannot ensure a win.