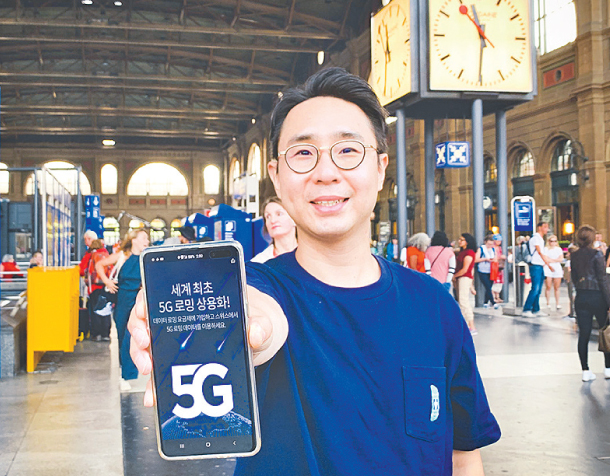 SK Telecom said Tuesday it will offer the world’s first 5G roaming from today in cooperation with Swisscom.

The largest mobile carrier in Switzerland commercialized 5G on April 17 and was the first carrier in Europe to do so. Currently, about 110 cities in Switzerland offer 5G connections, including Zurich, Geneva and Bern.

Korea’s largest mobile carrier said it has been working with the Swiss company since May to launch 5G roaming.

5G roaming has been more difficult to achieve than LTE roaming because few countries have the service and many different frequencies are used.

Switzerland was a good candidate for the 5G roaming partnership as it has already commercialized 5G and has stable long term evolution (LTE) coverage. 5G phones in the market receive both 4G LTE and 5G signals.

SK Telecom said its 5G roaming service will be available for only Galaxy S10 5G users for now. It said it is working to enable 5G roaming on other 5G devices, like the LG Electronics V50 ThinQ 5G, and make it available in other countries.

The price of 5G roaming was not released Tuesday. The carrier said existing users of SK Telecom’s data roaming plan will be able to use the latest service for free until the end of this year.

LG U+ also announced it will start 5G roaming from Friday in Finland. It partnered with Elisa, Finland’s largest carrier, for the service. The LG 5G roaming service will be available only to users of the LG V50 ThinQ 5G for now. The carrier did not reveal the price of its latest roaming service, saying it will offer the service for free to subscribers of LG U+ data roaming plans. It said the duration of the promotion period has not been fixed yet.