The machine works similarly to a capsule espresso machine, although you probably won’t be getting one for the office. It can make five different beers: an American IPA, a pale ale, an English stout, a Belgian-style witbier and a Czech pilsner.

Each set of capsules - different capsules contain different ingredients - can make 5 liters, or about 10.5 pints, of beer after roughly two weeks of brewing. Beer can be stored inside the machine for about 10 days without losing its fizz. It will cost 3.99 million won ($3,386).

The LG HomeBrew was first showcased at the Consumer Electronics Show 2019 in January and won the Innovation Award. It is being launched in Korea first, with launches in foreign markets scheduled for next year, starting with the United States. 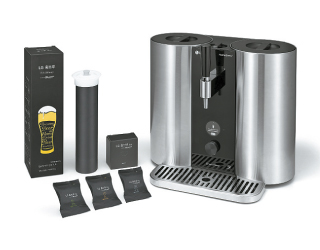 “Beer is a very global alcoholic beverage, so since the product’s development we have designed it with the intention of selling it in foreign markets,” said Song Dae-hyun, LG Electronics president of home appliance & air solution, during a press conference held Tuesday in central Seoul.

This year, the company will collect opinions and feedback from local customers before taking the product elsewhere, he said.

“The next likely target is the United States - we’ve been doing a lot of research on that market,” said Song.

In developing the HomeBrew, LG made visits to brewers around the world, going through 30 tons of beer in the process. The manufacturer of the capsules is British firm Muntons - a supplier of malts and other beer ingredients to craft breweries worldwide.

Sold at 39,900 won per unit, one flavor set comes with three capsules - yeast, hop oil and a flavor agent - and a package of wort, equivalent to unfermented beer. The brewing duration differs per flavor from nine days for witbier to three weeks for pilsner.

The HomeBrew is able to sense and automatically adjust the temperature and pressure according to the type of beer being brewed. Brewing requires sophisticated control of both factors throughout the process. The machine also automatically cleans itself between and during brewing.

The company is currently in the process of developing new flavors with Muntons. As LG HomeBrew is powered by the company’s Internet of Things (IoT) software ThinQ, the machine will be able to download the brewing algorithms of every newly added capsule.

“In consideration of hard-core craft beer fans who prefer to create recipes of their own, we’re thinking of ways to customize the capsules with Muntons,” said Jeong Soon-gi, a manager at LG’s water purifier business team.

Unfortunately, visitors won’t be able to try out LG HomeBrew beer when they visit LG stores, as the company does not have an alcohol license.