Korea’s own swimmers didn’t get their uniforms

Korea’s own swimmers didn’t get their uniforms 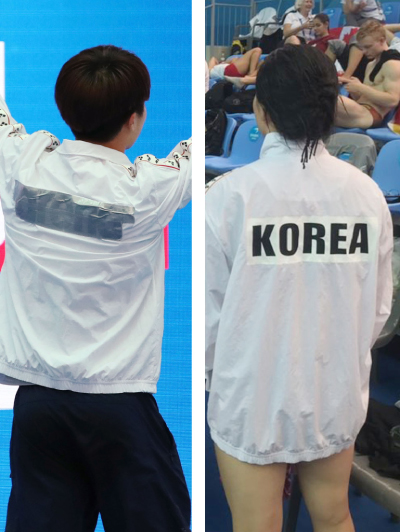 The Korea Swimming Federation failed to buy proper uniforms for the 18th FINA World Aquatics Championships in Gwangju, and Korean athletes were forced to wear unofficial uniforms with company logos, which they obscured with tape.

Athletes at international sports competitions wear uniforms that identify the country they are competing for.

In the men’s 1 meter springboard held on Sunday at Nambu University Municipal Aquatics Center in Gwangju, Korean athlete Woo Ha-ram was flanked by competitors from China, Mexico and Ukraine, all identified by their countries’ names on the backs of their uniforms.

But on the back of Woo’s uniform was a large strip of silver packing tape where the word Korea should be. That image was broadcast to at least 194 countries participating in the competition.

“We could not sign a contract with Arena Korea for their exclusive provision of uniforms for the Korean athletes in time,” said Kim Young-ki, deputy secretary general of the Korea Swimming Federation. “Our last-minute resort was to get back to Arena Korea, which provided us with training jackets sold in the market and labeled with the word Korea.

“But not all athletes received these in time because those competing in the diving events had to enter the Athletes’ Village earlier than others. So we had no other choice but to hide the company logos [with tape],” he said.

The divers were provided with uniforms with Korea written on the back on Monday, he said.

It is against FINA rules for athletes to wear uniforms - including training jackets and tracksuits - that have company logos on them. Sports federations sign contracts with sportswear companies in advance to specially manufacture uniforms that comply with the rules.

The Korea Swimming Federation’s contract with Arena Korea ended last December. The federation said the decision of the board of directors at the time was to look for other companies to manufacture the uniforms for the FINA World Aquatics Championships.

Six months passed, but the federation still had no contract with a sportswear manufacturer. A source told the JoongAng Ilbo that there were some disagreements within the federation that dragged on for months.

In the end, the federation contacted Arena Korea again.

“They came back to us and we signed a contract on July 1, to provide uniforms for the athletes for the next two years, but by that time it was too late to make uniforms for the FINA Championships beginning on July 12,” said Jeong Jong-hoon, an employee at Arena Korea. “We need at least six months to manufacture uniforms specifically for a sports event.”

Arena Korea ended up providing some 150 sets of uniforms to the federation, with the word Korea written on the back of the jacket and the Korean flag on the front.

But the Korean flag became an issue during one of the events.

Athletes in open water swimming are supposed to wear swimming caps with a three-letter acronym for the country’s name written on them - it would be “KOR” in the case of Korea.

FINA rules do not allow the caps to have flags printed on them for open water swimming.

But Korea’s athletes for the open water swimming event wore caps with the Korean flag on them. The caps were provided by the Korea Swimming Federation.

Just a few hours before the event on Saturday, the athletes were told by FINA’s organizing committee that their caps violated the rules and they were to either drop out or get a new swimming cap with just the country’s name written on it.

“It was a shock, I couldn’t think of much at the time,” Baek Seung-ho, who competed in the men’s 5 kilometer open water swimming on Saturday, told Yonhap News Agency. “All I could think was, ‘Did I just lose the chance to compete in my first FINA Championships?’”

The coaches of the athletes started making emergency calls to find blank swimming caps. They arrived some 30 minutes before the start of the event, according to Yonhap. The athletes had to write “KOR” on the caps using black markers.

“But they kept falling off during the race,” Baek told Yonhap. “I was very disappointed.”

The public noticed the unprofessionalism.

“Can it get worse than this? Some athletes had to use markers to write the country’s name on their swimming caps apparently,” wrote one user on Twitter on Tuesday. “I’m surprised they were able to fill the pool with water in the first place.”

“The FINA Championships is one of the top-five international competitions for swimming,” wrote another user on Twitter. “And here we are, as the host country, sending out our athletes without proper uniforms.”

The Korea Swimming Federation was embroiled in a corruption scandal in 2016, with 14 executive members of the federation indicted in March that year for bribery and embezzlement.