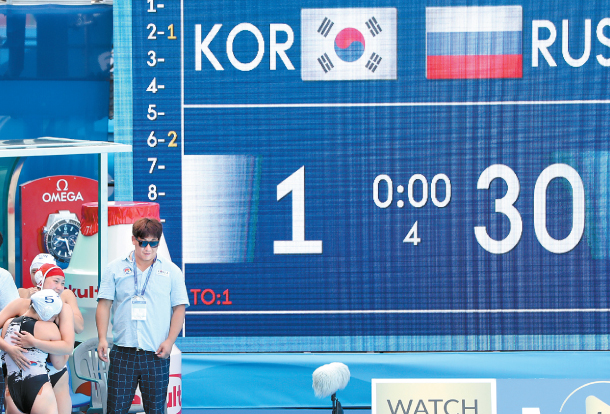 Now that they have the first one out of the way, the Korean women’s water polo team will try to score more goals at the FINA World Aquatics Championships today.

Korea will take on Canada to close out Group B action in the women’s tournament at 7:10 p.m.

After getting blanked by Hungary 64-0 in the opening game last Sunday, the collection of water polo neophytes got on the board against Russia, losing 30-1 on Tuesday on the goal by Kyung Da-seul.

Prior to the competition, the players had repeatedly said their biggest objective was to score at least one goal. With that taken care of, they will now go up against a very determined Canadian team still looking for its first victory.

Canada finished fourth at the previous World Championships two years ago, but has lost to Russia and Hungary to start the current campaign.

Diver Kim Su-ji will enter the preliminary in the women’s 3 meter springboard today, hoping to add another medal to her bronze from the 1 meter springboard. The semifinals are also held today, and the final will be tomorrow.