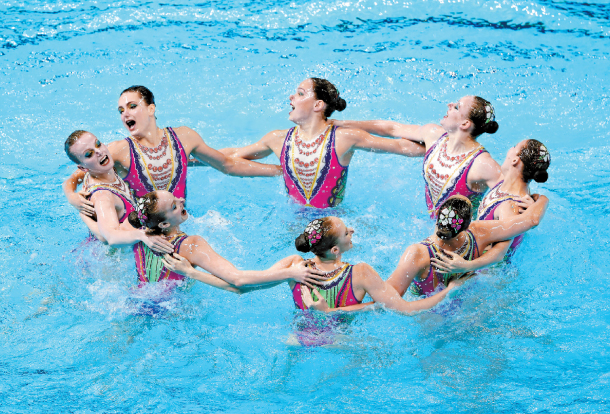 Russia won the team technical in artistic swimming at the Gwangju 2019 FINA World Aquatics Championship at Yeomju Gymnasium on Tuesday.

Performing eighth out of 12 teams in the final, Russia once again dominated the field. By receiving a score of 96.9426, Russia successfully maintained its lead as the four remaining teams in the order failed to overcome Russia’s high score.

Since the team technical routine was added to the World Championships in 2007, Russia hasn’t missed the top of the podium. This is its seventh consecutive gold in team technical and Russia continued its dominance in artistic swimming, as this is its fourth gold in the sport in Gwangju.

The team highlight routine is the only event at this year’s World Championships that Russia failed to medal in, as the country didn’t compete in it.

Japan, which won bronze in the event during the 2015 and 2017 World Championships, just missed the podium by finishing fourth by receiving a score of 92.7207.

Performing in a team of eight artistic swimmers, each team has to include the required elements within their choreography within the time of two minutes and 50 seconds. According to FINA competition regulations, all routines - technical, free, free combination and highlight - can end 15 seconds before or after the allotted time.

The technical event differs from the free event in that athletes have to follow a prescribed order of specific moves, with points focused on execution. As there is less of an emphasis on creativity, technical events are also much shorter than free events.