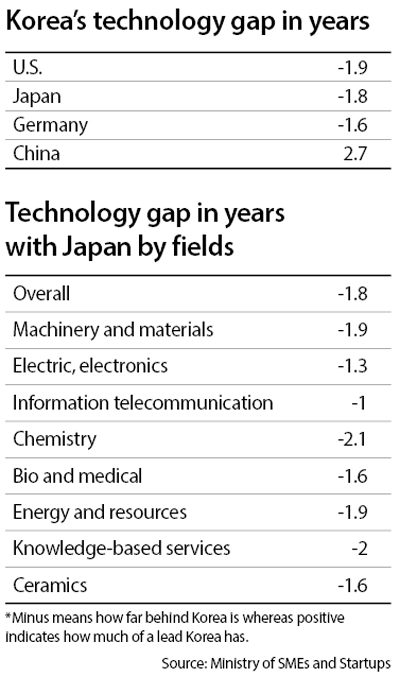 The government plans to expand research and development (R&D) tax credits to include the three key materials that have been restricted for export to Korea by the Japanese government, as well as all other areas that could be affected if Tokyo decides to fully exclude Seoul from its 27-country white list.

The plan is to include tax credits on R&D in next year’s tax reform plan, due to be announced later this month.

The goal of the tax credit is to narrow the gap between Korean and Japanese technologies. The Ministry of SMEs and Startups says Korea is currently 1.8 years behind Japan in terms of technological development.

According to the Ministry of Finance and Economy on Wednesday, for companies to get tax credits on their R&D investments, they have to be related to new growth engines or original technology.

Currently, the government provides tax breaks on human resource and raw material expenses for R&D in 157 areas including 5G, intelligent semiconductors and sensors, and 3-D printing. Conglomerates get a tax credit of 20 percent to 30 percent, smaller companies that are still too big to be considered SMEs get 20 percent to 40 percent and SMEs get 30 to 40 percent.

The Finance Ministry plans to further expand not only the tax credit ratio but also the areas and technologies that are eligible for the tax benefit.

“We are currently sorting out the items and technology that will be eligible [for the tax credit],” said a Finance Ministry official. “It’s likely that materials and parts that are currently heavily dependent on Japan will be selected first.”

The official added that the government will review areas that are requested by companies to be included on the list.

The government also plans to expand the investment tax refund previously limited to R&D centers in Korea to include those operating overseas.

This is in response to Korean company requests that overseas centers are included in order to secure competitiveness, because there’s a need to cooperate on technologies developed in advanced economies.

The government is also looking into raising the shrinking tax credit on R&D that isn’t included in the list of 157 new growth engines.

The Finance Ministry along with the Ministry of Science and ICT, as well as the Ministry of Trade, Industry and Energy, is discussing expanding the R&D budget and plans to include spending that could be made within this year through the supplementary budget that is currently held up at the National Assembly. The government is also reviewing the possibility of cutting back on the feasibility revaluation on some R&D projects.

Since Japan has enacted retaliatory restrictions on items exported to Korea and may expand those measures, there has been a growing call for Korea to reduce its dependency on Japan. The recent restrictions have highlighted the reliance of Korea’s semiconductor and display industries on materials from Japan.

It’s not only semiconductors and displays that are affected, as the material and parts dependency of other key products including green vehicles, ships, drones and robotic motors are dependent on material imported from Japan.