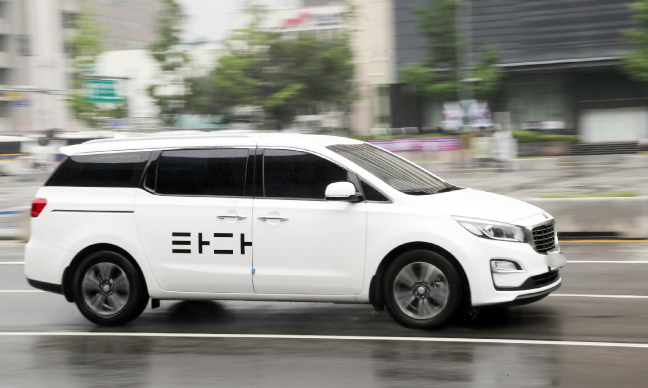 A Tada vehicle speeds down a road in central Seoul on Wednesday. The government will ban the use of rental cars as taxis. [YONHAP]

Transportation laws are to be changed in order to allow for the operation of new mobility services, though Tada, one of the largest ride-hailing services in the country, is not likely to benefit.

The Ministry of Land, Infrastructure and Transport announced Wednesday its long-awaited compromise aimed at allowing for new services to develop while ensuring the sustainability of established taxis.

The need for a government plan arose as conflicts between new and old transportation took a turn for worse, with some taxi drivers protesting against new ride-sharing and ride-hailing services by committing suicide.

Under the plan, new mobility services will be granted business licenses, but they will also have to set aside a certain share of their profits to a fund providing support to the taxi industry. A separate government body will oversee the contributions.

The plan also prohibits services from using rented vehicles and will require new service drivers to hold taxi driving licenses. The government explained that rental vehicles were excluded from the plan due to opposition from the taxi industry, adding that taxi driving licenses should be required to ensure safety.

The announcement deals a heavy blow to Tada, which operates by using rented vehicles.

“There seems to be a limitation based on established regulations and interests,” said Park Jae-uk, CEO of VCNC, which owns Tada. “As [the plan] was made based on the current taxi industry, there will likely be a higher barrier for new industries.”

Park explained that Tada will present its own plan for cooperation with the established transportation industry and will continue talks with the government and lawmakers.

Kakao Mobility, which had its carpooling service shelved due to protests from taxi drivers, remained cautious following the government announcement and called for more talks.

“There needs to be additional talks for specific measures to be carried out,” said Kakao Mobility in a statement. “This is the first plan to be made in the domestic mobility market, so there could be concerns.”

The Transport Ministry’s plan includes measures to ease existing regulations on vehicle types and exteriors, such as taxi lamps.

The government also announced measures to support the taxi industry by implementing a salary for drivers operating under taxi companies. It said that the new wage system will improve working conditions for taxi drivers and also address problems, such as drivers refusing passengers.

“It looks to reform the taxi industry in a future-oriented way,” said the Korean Taxi Worker’s Union.

The government will submit proposals for amendments to the National Assembly while also making revisions to administrative transportation regulations by the end of the year.