Hoppipolla found their voice by being different: ‘SuperBand’ winners are now ready to make music of their own

Hoppipolla found their voice by being different: ‘SuperBand’ winners are now ready to make music of their own 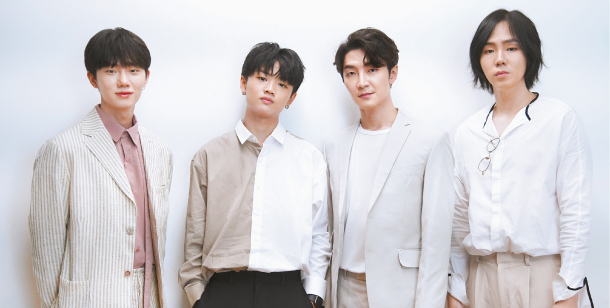 What do singers Akdong Musician, Bolbbalgan4 and Lee Hi have in common? They all kicked off their careers on music competition shows, skyrocketing to stardom after flaunting their talents on television.

Hoppipolla is Korea’s latest group of musicians hoping to make it big in the industry after coming out on top on a popular TV show.

Last Friday, the four-member band snagged the top prize on JTBC’s “SuperBand.” The show invited over 120 young musicians to show off their talents and their ability to perform together with other talented performers. Contestants were made to form ad hoc bands amongst themselves for each round, compete against the other bands and regroup into new teams as the stages progressed.

In the end, it was Hoppipolla, a band that came together during the final round of the show, that won over the hearts of both judges and viewers with their artful interpretations of hits like Avicii’s “Wake Me Up” and Linkin Park’s “One More Light.”

Hoppipolla, which means “jumping into puddles” in Icelandic, is comprised of frontman I’LL on piano and vocals, Kim Young-so on the guitar, Ha Hyun-sang on vocals and Hong Jin-ho on the cello. The band was commended for its innovation - in one performance, all four members played music on a single cello simultaneously by strumming and drumming on different parts of the instrument.

With their win, the band not only took home 100 million won ($85,000) and an SUV, but also gained the opportunity to release their own album and embark on a world tour as a group.

“It still feels like I’m dreaming every day when I wake up,” I’LL said during a press conference at JTBC’s headquarters in western Seoul on Wednesday. All four members gathered to express their thoughts on the win and discuss their future plans as a group.

“When we were on the show it was difficult and felt like school all over again, but now that we’re done, we feel like we graduated,” I’LL added.

Although the journey may have been difficult, each individual members’ musical talents made Hoppipolla a force to be reckoned with from early on.

I’LL and Ha have both been active as singer-songwriters before joining “SuperBand,” while Kim and Hong have been performing as soloists. I’LL majored in piano at the Berklee College of Music in Boston and Hong holds an undergraduate degree from Seoul National University and a masters from University of Music Wurzburg.

The harmony between the members was another major asset that helped set Hoppipolla apart.

“When I first met Hyun-sang I thought that our voices would be really different, but when we tried singing together I was surprised how harmonious we were,” I’LL recalled. “I think it’s because our musical root or core is the same.”

Having a cello in the mix, unusual for any contemporary band, was also a blessing in disguise that came with its lessons.

“In the beginning I was worried how to highlight my cello in ‘SuperBand,’ but later I came to accept that the cello doesn’t always have to be in the front,” said Hong.

“When musicians with different instruments meet there are clashes, but our team was really good at being generous,” said I’LL. “We all recognized how to appreciate the beauty of absence.”

“Sometimes our team watches movies together before performances so we can agree on what to visualize as we play,” I’LL added, revealing that “The Notebook” (2004) was one of the films the band watched before one of the performances.

The band also addressed its lack of a drum or bass guitar player, who are traditionally regarded as core components in a band.

“Some people worry about the lack of drums and so on, but we are open to using digital sounds in our music and I think we’ll be able to try out a lot of fun things by mixing different sources together,” said I’LL. “We are also open to accepting members who play different instruments.”

Although their “SuperBand” journey may be over, the team has many tasks at hand. There are concerts to get ready for and also a search for a management agency.

Given that Hoppipolla only came together a few months ago, the band will also spend some time “finding our color,” as Hong put it, not limiting themselves to specific genres like rock.

“I want to write music that will make listeners feel like they have just finished watching a movie,” added Ha. While they had only performed existing songs during “SuperBand,” Hoppipolla is set to perform their own songs from now.

Ahead of its world tour, Hoppipolla will kick off a nationwide tour on Aug. 3 and share the stage with the five other top-scoring bands from “SuperBand” - Purple Rain, People on the Bridge, After Moon, Mone and Lucy.

Tickets go on sale this Friday.