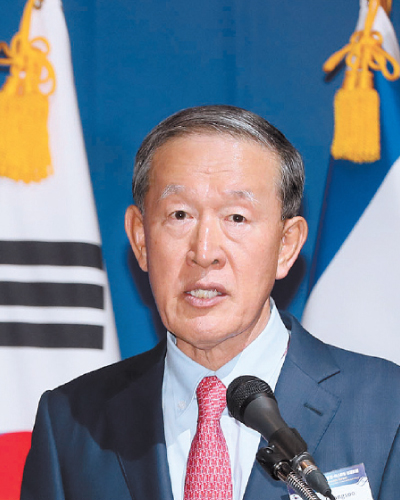 Huh Chang-soo, chairman of GS Group, the country’s eighth-largest chaebol by assets, said on Wednesday that members of the conglomerate should be prepared for challenges related to Japanese export restrictions, which are likely to be prolonged.

The comments came as he discussed the group’s second half at the third-quarterly meeting of GS executives at GS Tower in southern Seoul. Some 150 executives, including CEOs of related companies, attended the meeting.

Added to the trade dispute are other factors, such as economic weakness and volatility in commodity prices and the currency, he said. “We are facing trouble as revenue from exports in semiconductors, oil and petrochemicals dwindled in the first half.”

“We should make efforts to precisely predict economic indices and manage risks,” the chairman added.

The impact of Japan’s ban on the export of materials needed for semiconductors and displays is not significant at the moment, but additional restrictions could deal a huge blow to the Korean economy, GS forecasts.

To prepare, Chairman Huh emphasized that the conglomerate should upgrade its business portfolio, secure key talent with distinguished qualifications and change the way employees work.

“We should promote the competitiveness of core businesses and be able to get rid of businesses that are having a hard time securing an edge,” Huh said at the meeting.

He also encouraged executives to find “outstanding players” in other business sectors and to learn from them.

“We should change the way we work,” he said. “As technologies, such as artificial intelligence [AI], big data and blockchain develop each and every day, customers’ demand fast change.”

In a press release, GS vowed that it would transform itself into an “agile organization” that is equipped with a culture that enables members to communicate with one another actively.