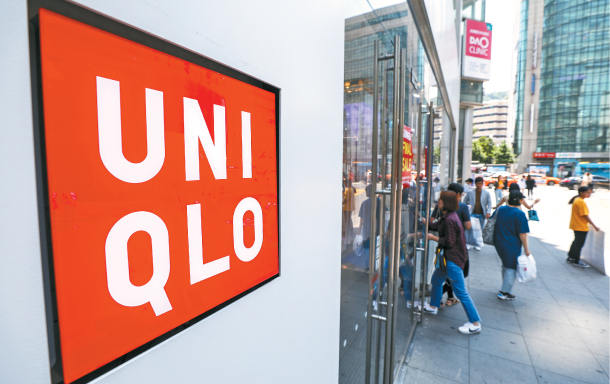 A Uniqlo store in Jung District, central Seoul, earlier this month. Uniqlo is one of the Japanese brands that is being boycotted by Korean consumers in response to the Japanese government’s restrictions on exports to Korea on three materials used in the manufacturing of semiconductors and displays. [NEWS1]


Uniqlo Korea has apologized after a Japanese executive commented last week that the impact of a Korean consumer boycott of the brand “won’t last for long.”

The remark came from CFO Takeshi Okazaki of Fast Retailing, the owner of Uniqlo, on July 11 during an event for investors. When asked about the move in Korea to boycott the brand, Okazaki said it had “already caused a certain amount of impact,” but it “won’t last for long.”

Japanese news coverage of the event quickly spread on Korean online forums and social networks, outraging local consumers who felt that Okazaki’s comments were belittling the boycott by implying it was an impulsive, short-lived movement.

“We deeply apologize for the frustration caused by the executive’s remark,” said a statement issued by Uniqlo Korea on Tuesday.

“What we tried to convey was that despite the hardship, the company would do what we can by continuing to offer good products and services. We failed to clearly deliver our message by expressing it in an insufficient way and we apologize once again for having caused discomfort to a lot of people.”

Uniqlo does not disclose its revenue in Korea. According to research conducted by one local card company at the request of domestic newspaper Seoul Shinmun, the number of transactions at Uniqlo by debit and credit cards from July 3 through 10 fell by roughly 26.2 percent compared to the previous week.

Even before Okazaki’s comment, Uniqlo was high up on the list of boycott targets as one of the most visible Japanese brands in the country.

After Japan tightened export restrictions to Korea on three high-tech materials, a list of Japanese brands and Korean alternatives circulated across social media.

As of Wednesday, the hashtag “boycottjapan” had been used on more than 4,900 Instagram posts.

On the other end, local brands that are considered alternatives to Japanese products are seeing a hike in stock prices. Local stationary company Monami, for example, saw stock prices shoot up to the 4,000 won ($3.40) level in early June. For the past six months, the figure had never risen above 3,000 won.

Japanese pens and mechanical pencils have long been popular in Korea. As boycott efforts continue, Korean consumers have been encouraging one another to try Monami pens instead of Japanese alternatives.

On Wednesday, the local stationary company closed at 4,550 won, 9.11 percent higher than the previous trading day.