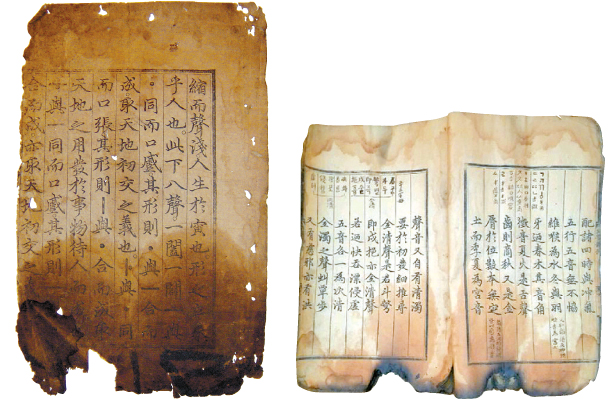 The Cultural Heritage Administration (CHA) can finally raid the home of Bae Ik-gi, the man who has held and concealed the nationally treasured document “Huminjeongeum” for the past 11 years. On July 11, The Supreme Court dismissed Bae’s appeal asking the court to stop the CHA from carrying out a forcible extraction. In short, the Supreme Court ultimately ruled that the ownership rights of the Haerye segment of the “Hunminjeongeum,” which Bae has been hiding, belong to the administration, giving the CHA the green light to take the “Hunminjeongeum” from Bae by force.

But, the organization is pessimistic that Bae will hand over the “Hunminjeongeum” despite court’s ruling.

“If he was such a receptive person,” said an official from the administration, “he would’ve handed it over many years ago.”

The administration said it does not plan to raid and search Bae’s house by force, indicating that there’s a high risk of Bae destroying the national treasure. The CHA will continue to meet with Bae and make attempts to convince and persuade him instead. The administration also said it plans to send a series of official documents demanding that Bae return the document. If Bae continues to disregard the requests, the CHA said it plans to accuse Bae of concealing and damaging a national cultural property and bring the cased to prosecutors.

How did this national treasure get into Bae’s hands in the first place?

“Humnimjeongeum” is a manuscript that describes the Korean alphabet system. The book was written by Joseon Dynasty (1392-1910) court scholars in 1446 as a guide to hangul, the Korean alphabet system that was created by King Sejong (1397-1450) the same year. The book has two parts: the Yeui section, which explains why hangul was created, and the Haerye section, which details the principles, usage and gives examples of the writing system. Since the Yeui section is replicated in several other ancient documents, its value is not as high as the Haerye section of the book, which is known to be extremely rare.

Currently, the only existing copy that people are aware of is the one that is safely kept in the Kansong Art Museum in Seongbuk-dong, central Seoul. Respected art collector Jeon Hyeong-pil (1906-62) discovered a copy of “Hunminjeongeum” in 1940 that has both Yeui and Haerye segments and purchased it for the museum he founded. The book is National Treasure No. 70 and is also registered on Unesco’s Memory of the World list. 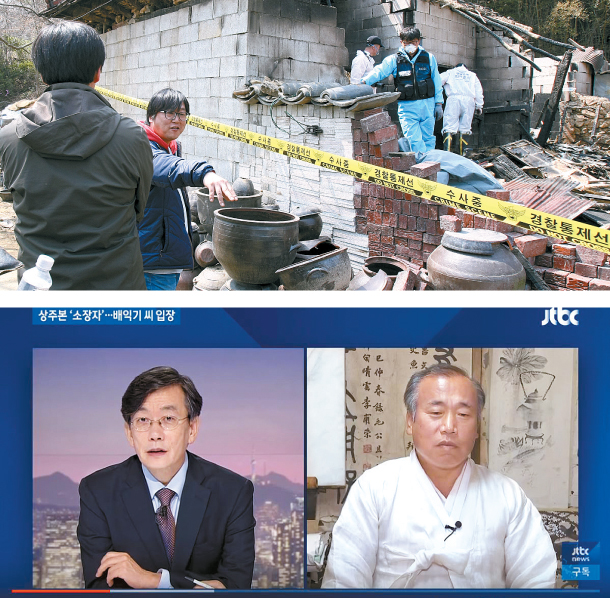 JTBC’s Newsroom anchor Sohn Suk-hee, left, interviews Bae Ik-gi on Monday evening. In May 2015, a fire broke out at Bae’s house in Sangju, North Gyeongsang, below, where he had been keeping the “Hunminjeongeum.” [SCREEN CAPTURE]

Then Bae, who is said to be a scholar with a specialization in classic Chinese literature and an avid collector of ancient artifacts in Sangju, North Gyeongsang, revealed in 2008 that he had the second copy of this valuable text. Bae claimed that the text was amongst two boxes of ancient books that he had purchased from an antiques dealer for 300,000 won ($255) that year. Investigators from the CHA visited Bae’s home and concluded that the book was “authentic, in good shape and even has a footnote,” which were not present in the version that the Kansong Art Museum has.

A month later, the antique dealer Jo Yong-hun, who passed away in 2012, claimed that the “Hunminjeongeum” wasn’t supposed to be in the boxes and that Bae had stolen the book from him. Jo filed civil and criminal lawsuits against Bae.

In the first trial of Bae’s criminal suit, Bae received a 10-year jail sentence but when the case reached the Supreme Court in 2014, the judge declared Bae innocent.

In the civil suit, the Daegu District Court ruled in 2010 that Bae should hand over the book to Jo and the ruling was confirmed by both the High Court and the Supreme Court in 2011.

As Bae continued to refuse to return the “Hunminjeongeum,” Jo announced in May 2012 that he would donate the book to the Cultural Heritage Administration. Ironically, without the presence of the artifact, the CHA held a donation ceremony and Jo passed away later that year.

In 2015, a fire broke out at Bae’s house in Sangju, where he was hiding the “Hunminjeongeum.” Bae managed to barge into the home with a hammer and said that he had saved the book after he got out. He claims that he’s keeping the book in a safe place.

Bae released a photograph of the “Hunminjeongeum” to local media, insisting that it was still safely with him somewhere.

In 2015, after the fire, Bae announced that he would sell the text to the local government for 100 billion won, 10 percent of the estimated amount. The CHA valued the “Hunminjeongeum” that Bae possesses to be worth over 1 trillion won.

However, when Bae appeared on JTBC’s “Newsroom” on Monday evening, he said that he would give up the “Hunminjeongeum” if the state gives him at least one tenth of the value.

“More is always welcome,” he added.

The maximum amount a state can pay as compensation for a treasured artifact is 100 million, according to the CHA.

“I announced that I have the ‘Hunminjeongeum’ back then so that the state could help me get it designated as a National Treasure but instead, I was falsely accused,” Bae during the interview with JTBC anchor Sohn Suk-hee.

He said that he is thinking about filing another lawsuit claiming that the “Hunminjeongeum” does not belong to the state. But, since he wants to see how the CHA reacts to this situation, he said he is willing to wait and see how things go. Bae also added that he lost his previous trial due to a lack of documents, insisting that he has the ability to win the case if he is fully prepared.

“Although the recent ruling by the Supreme Court confirms that the ‘Hunminjeongeum’ belongs to the state,” an official from the CHA said, “this ruling has no affect on Bae as he continues to keep his mouth closed.”

According to the CHA, the first priority is to safely bring get the artifact without it being damaged, but the organization is also concerned with how well Bae is storing the century-old document.