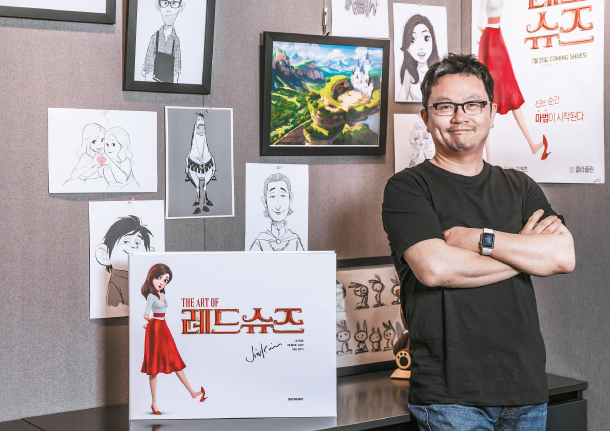 Director Hong Sung-ho, president of Locus Animation Studios, poses with pictures of characters from “Red Shoes.” The film is set to be released in theaters on July 25. [LINE FRIENDS]

When the trailer for the animated film “Red Shoes” was released, it almost instantly created buzz in Korea. Featuring the voices of big-name stars such as Chloe Moretz and Sam Claflin as the voice actors, the film was 100 percent animated by Korean animators.

The story itself may be quite familiar to local audiences. Loosely based on “Snow White and the Seven Dwarfs,” the film’s plot is a fusion of many popular Western fairy tales. The movie’s protagonist Snow White is a beautiful princess, but only when she wears her magical red shoes. Without her shoes, Snow becomes a tad chubbier and suddenly unrecognizable to the people who know her as the beautiful girl in the red shoes.

On her way to find her missing father, she comes across “The Fearless Seven,” seven princes who have been cursed by a fairy and turned into stumpy, green dwarfs after they mistook the fairy for a witch. In order to break their curse, they must receive a true love’s kiss, and the seven princes immediately hope that Snow is the one that can break their spell.

The movie was selected to be the opening film of the 23rd Seoul International Cartoon & Animations Festival, which kicked off on Wednesday. Before its official release on July 25, the Korea JoongAng Daily met with the director Hong Sung-ho, president of Locus Animation Studios, to learn more about film and how it was made. 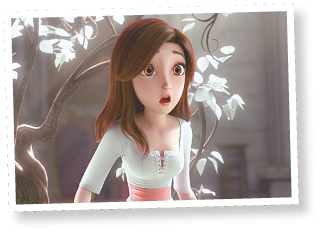 Q. The main inspiration of the film came from the fairy tale “Snow White and the Seven Dwarfs.” Out of many fairy tales, why did you pick this one?

A. I wanted to tell a story about stereotypes. Ever since I was young, whenever I heard the story of Snow White, I was always more interested in what happened to the seven dwarfs when the princess rode away with the prince. After all, it was the dwarfs who had taken care of the princess, and then this handsome prince comes galloping along to the rescue and takes her away - that seemed unfair to me.

Maybe I sympathized more with the dwarfs because I was short and stumpy like them (laughs). I’ve only heard that I was handsome from my mother. Others would describe me with other words, like I’m cute, diligent or good-natured.

I guess I was always taken with the seven characters in the story, so I wanted to start off with the tale’s most famous line: “Mirror, Mirror, on the wall, who is the fairest one of all?”

Then is the movie’s main message about inner beauty?

Yes, in some part, it is. But like I said before, even though nobody thought of me as handsome, I would always get the impression that I should be better and more hard-working to make up for my lack of beauty. Isn’t that enforcing another kind of stereotype?

I mean, judging a book by its cover isn’t important - should the contents always have to be wonderful and meaningful? I think not. If somebody likes me, they will find me handsome and beautiful and see me as the wonderful person that I am. I shouldn’t have to change or be a better person for them to like me.

That is why our main character Snow isn’t especially kind or courageous. The audience will also sense that she isn’t particularly beautiful on the inside. She has a straightforward personality, can easily get angry, isn’t hesitant to express her feelings and she can lie too, if needed. She is basically what all of us are in our everyday lives. Ordinary people aren’t bad, but we aren’t always good either. And I wanted to say that is okay through Snow. Her character really doesn’t change throughout the story. She is an average person, and Merlin and Snow fall in love because they like each other as they are.

I noticed that the two main characters [Snow and Merlin] never say “I love you” to each other, not even at the very end. Why is that so?

It may vary from person to person, but I firmly believe that words are not that important. It’s what I actually do that can move the hearts of the people I love. Sometimes people say “I love you” without meaning it. So in my film, I didn’t want the characters to say that out loud. I thought saying it out loud might ruin the value of love that the two feel for each other.

Is there a reason why you chose such a familiar story to tell?

This is my first feature animated film, and I wanted it to be good. In order to do that, I needed to persuade people to invest in it, and that is why I used stories that people were most familiar with. It’s like trying out a new kind of food. People might be scared or hesitant to taste a strange food they’ve never seen before, but they are willing to try out familiar foods, right? So I used the most well-known stories to appeal to audiences worldwide.

Some people may say that the stories are too familiar or that the characters look like Disney characters, but if you want to see a unique character or different kind of style, I think it’s better to find that in short or independent films. My purpose was to get audiences to accept my story as easily as possible. If we get to practice and produce more high-quality animated films to the point where people want to watch whatever we produce, then we may be able to try out something else.

But we are complete newbies in this industry. So, we needed a tactic to attract the audiences and investors in the most mundane way as possible, which is also the reason why we cast English-speaking actors.

You won the grand prize at the Kofic script writing contest in 2010 for “Snow White and the Seven Dwarfs,” and the movie is finally coming to theaters now. Why did it take so long to bring it to screen?

After I won the grand prize, I still went through a lot of changes in the script. There was one diversion where Snow White was the bad guy. In that story, Snow becomes obsessed with beauty like her evil stepmother and orders the seven dwarfs to find the shoes to give her eternal beauty, but the story got too complicated.

Also, we were pioneers in a new industry. I’m not aware of any other local animation studios that specialize in putting their works in theaters like we do. We didn’t have any prior system or guidelines on how to create a high-quality animated film, because it was never done before in Korea. So everything was new to us. For instance, our initial goal was to have each animator make 3.5 seconds, but we only got around to making one second per person in our first year because none of us had the experience, and we needed time to adjust and practice too.

I’ve learned that being an animated film director is a totally different position from being a film director. Although it’s an important position, I’m more of a guide rather than a director. There’s nothing I can do alone. Everyone literally needs to work together to create the film.

We first met a year before I established Locus Studios in 2009. I’ve been persuading him for years to come and work with me (laughs). We’ve been talking and exchanging drawings for eight years and he finally left Disney to work on “Red Shoes” in 2016.

Is it true that Moretz and Claflin said yes to the film right after reading the script?

Yes, it is true. I like to think of our film as a kindhearted one. Our intentions are nice, so I wanted the actors to have a good mind and didn’t want them to be involved in any kind of scandals. It was a very difficult condition to fulfill, and I am very, very lucky to have Moretz.

I mean, here was a script sent from a practically anonymous studio written by an anonymous director, and she told us yes. She said that the story had a message that she really wanted to tell young girls nowadays. For Merlin, I wanted the actor to have a British accent, so that narrowed down the pool. I think it took a year to cast Claflin.

Can you give us a clue about the studio’s next project?

I can’t give you the specifics, but I can say with confidence that we’ll continue to create animated movies that appeal across generations. But, we are trying to target more grown-ups [for our next project.]