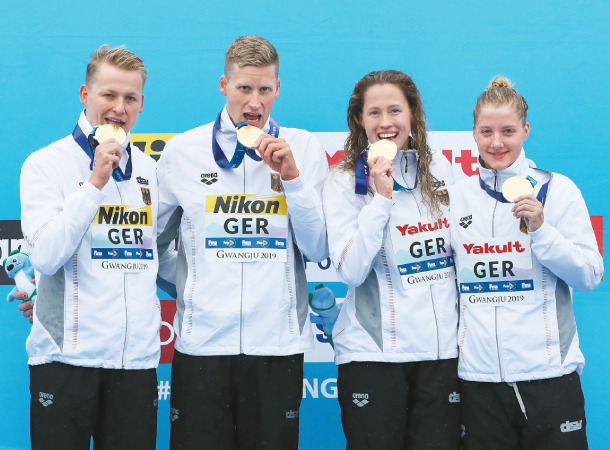 Team Germany poses for a photo holding their gold medals after winning the mixed 5-kilometer relay in open water swimming in Yeosu on Thursday. [YONHAP]

However, that didn’t slow the team down. Instead, they quickly made their way back up the standings to take the lead by the sixth split, clocking 41 minutes and 34.8 seconds. Team Germany successfully maintained their lead to finish their race at 53 minutes and 58.7 seconds, a close 0.2 seconds ahead of the silver-medalist.

“The race and the results were amazing and I am speechless, except to say that I am happy, and that this was my most important race,” Germany’s Lea Boy told FINA.

“All of us are really happy taking down the win today,” Germany’s Rob Muffels told FINA. “I think each of us did a really good job, it was a perfect strategy. The conditions were quite good with some little waves, and they were not too big or challenging. We started with our two girls swimming the first two legs and then our boys had to make their way to the front.”

Germany has now won its third gold in the event since it was added to the World Championships in 2011. Looking at Germany’s medal streak in open water swimming at this year’s World Championships, they’ve already taken four medals - two gold and two bronze.

This was Muffels second medal at the World Championships. Previously, he won a bronze in the men’s 10 kilometer race. As the 10 kilometer is an official event at the Olympics, Muffels earned a spot at the 2020 Tokyo Games.

“For me, I think it was a great program this week,” Muffels told FINA. “I earned a second world championship medal in this event and I earned a bronze medal in the 10 kilometer. It was fantastic for my teammate to win the 10 kilometer but the best part of the week was that Florian [Wellbrock] and I both qualified for the Olympics. We look forward to this streak of good swimming continuing with our pool swimmers.”

In the mixed 5-kilometer relay, a team of four swimmers - two female and two male - each swim 1.25 kilometers.