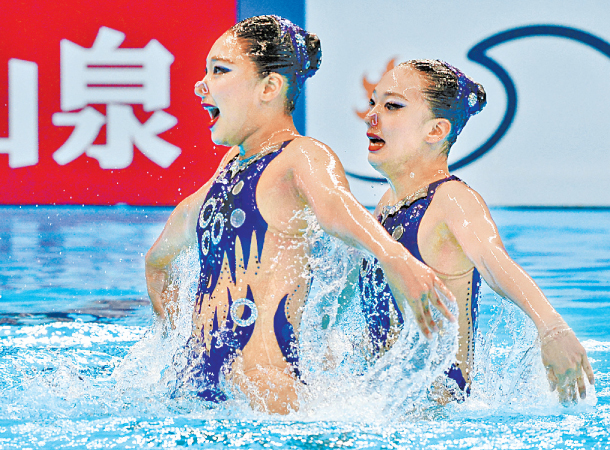 Korean artistic swimmers Baek Seo-yeon, left, and Koo Ye-mo perform during the preliminary round of the duet free competition in Gwangju on Tuesday. [YONHAP]

Having a swimming world championships at home has been a boon for young Korean artistic swimmers, who otherwise wouldn’t get such a close look at the best of the best.

The FINA World Aquatics Championships being held in Gwangju have been an opportunity for those swimmers to watch and learn and be inspired.

“Russia is the best in this sport, but personally, I’ve been watching swimmers from Spain and Italy closely,” said Baek Seo-yeon, 18, on Tuesday, after her preliminary in the duet free routine event at Yeomju Gymnasium. “Artistic swimmers from these two countries are really expressive and charismatic. I’ve also been impressed with how well they perform as a team.”

“Their synchronization is really impressive,” said Koo, who competed at last year’s Asian Games with Baek. “This is a far bigger event than the Asian Games, and it’s nice to perform in front of so many fans. I think we’ll continue to get better with more experience like this.”

Koo and Baek finished 33rd in the duet free routine preliminary, and didn’t qualify for the final, open to the top 12 teams. They both said they were more relieved that it was over than they were disappointed not to reach the final, saying it was the most challenging event for them.

“We have the team free and free routine combination left, and we want to have a strong finish,” Baek said. “My goal is to just enjoy the moment and have fun with the crowd.”

“Our artistic swimmers have very little international experience, but they’ve been doing the best they can,” Kim said. “I think performing in competitions like this will help bring out the best in them.”