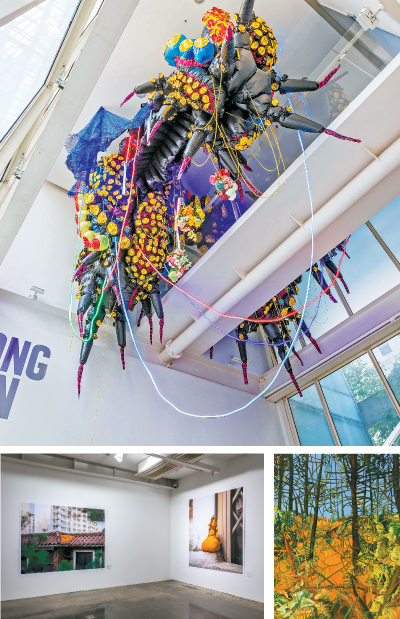 Lee Byungchan’s “Creature,” made of used plastic bags, top; Yoo Youngjin’s “Cambrian Explosion,” above left, a fake documentary about the evolution and proliferation of polyurethane foam used as buffer or insulation material; and Kim Ji Seon’s painting “Blue Sky” about her memories of senses on Jeju, above right, are part of the “Summer Love” show at SongEun ArtSpace in southern Seoul. [SONGEUN ARTSPACE]

Each of the artists held or is scheduled to hold a solo show between 2017 and 2019 at SongEun ArtCube, another space belonging to the foundation in southern Seoul, exclusively for the foundation’s program that finances and supports young artists.

“We have made this exhibition in a way that it can be a group of solo shows rather than a group exhibition, while avoiding forcibly connecting each artist’s work with another’s,” said Kim Sung-woo, an independent curator who consulted for this show. He was one of the 11 curators for the 2018 edition of the prestigious Gwangju Biennial.

In this loosely and flexibly-constituted exhibition, viewers may see some points of connection between the artists’ works.

Viewers will see artist Lee Byungchan’s “Creature”(2019), installed on a bridge between two rooms on the third floor, first of all, when they climb the stairs to the second floor, where the exhibition starts. The monstrous creature, made of used plastic bags swelling and shrinking as if it is breathing, is gaudily decorated with multicolored flowers and more, which may remind viewers of Korean shamanism. “It satirizes overproduction, overconsumption and materialism,” Kim said.

It could be loosely connected to the photo and video pieces by artist Yoo Youngjin, together titled “Cambrian Explosion,” on the fourth floor. They make up a fake documentary about the evolution and proliferation of polyurethane foam, used as buffer or insulation material in the construction and repair of houses and is sometimes exposed when the houses are worn out.

Some viewers may think that these two works have some contact points with Oh Jeisung’s film about a house, the homeowner, the tenant, the cleaner and Seongjusin, a deity that protects homes in a Korean folk religion. The film suggests that a house is not only a residence but also an important asset and where many desires collide.

Of course, not all the works in this show are connected. Kim Ji Seon’s paintings, in which she re-constructed memories of her senses on Jeju with her records of images and sounds there, and Hwang Moonjung’s life simulation game “Great Artist Maker” are not linked to others’ works, but are independently attractive.

The exhibition runs through Sept.28. Admission is free. The art space is closed on Sundays. Go to Cheongdam Station, Line No. 7, exit No. 9, and walk for 10 minutes.