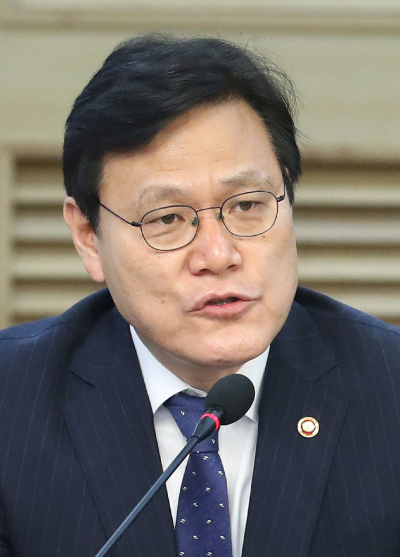 Financial Services Commission (FSC) Chairman Choi Jong-ku announced his resignation just a day before his second anniversary on the job.

On Thursday, he said that he offered to step down recently, but there was no indication as to whether the Blue House had accepted.

“My understanding is that a major cabinet reshuffle is under review,” Choi said. “Although the tenure is three years, I thought it was the duty to expand the choices.”

He said that he hoped his successor would be a person who will continue working closely with the Fair Trade Commission.

“When policy chief Kim Sang-jo headed the Fair Trade Commission, the two commissions had good cooperation,” Choi said. “I hope the heads of the two departments, which set market regulations, will continue to cooperate closely.”

Asked if he plans to run in the general election next year, he said no.

Recent reports suggest that the ruling Democratic Party is trying to recruit Choi to run in the general election representing the party in Gangneung, Gangwon, his hometown. They have also suggested that the Blue House is looking to replace Finance Minister Hong Nam-ki with Choi.

Despite the position having a three year term, Choi’s predecessors have normally served two years before resigning.

One trait common to these candidates is that they majored in economics at the Seoul National University, which is also the alma mater of Blue House policy chief and former FTC commissioner Kim Sang-jo.

While serving in the position, Choi had good cooperation with the Blue House and the Land Ministry in implementing tough real estate regulations, including more stringent loan requirements, in an effort to cool an overheating market centered in Gangnam, southern Seoul.

He also took aim of the cryptocurrency investment frenzy that gained steam around the second half of 2017 and lasted until early 2018. Measures included requiring cryptocurrency holdings to be linked to real-name bank accounts.

Choi is also known for championing innovation in the financial industry, holding the commission’s first Korea Fintech Week at the Dongdaemun Design Plaza, central Seoul in May.

At the same time, he emphasized the need for inclusiveness, especially in today’s environment where many feel left out or affected negatively by the rapid growth of technology and disruption in existing industries.

This stance put him at odds with start-up entrepreneurs. He was even accused of adopting this attitude in preparation for next year’s election. Choi’s resignation came during a briefing where he said the ongoing tensions with Japan will have little impact on Korea’s financial markets.