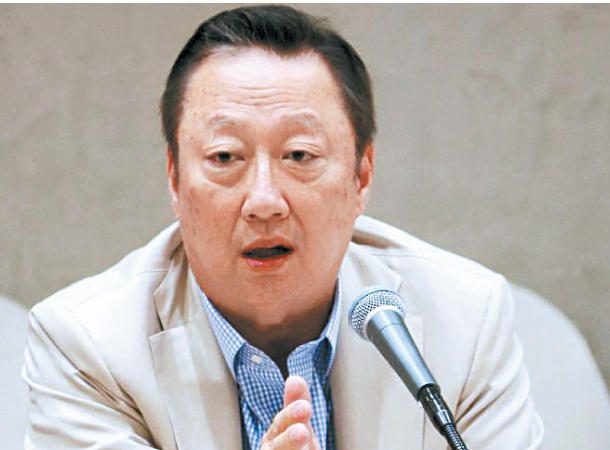 JEJU - Park Yong-maan, chairman of the Korea Chamber of Commerce and Industry, urged Korean corporate leaders to trust President Moon Jae-in in dealing with the ongoing trade tension with Japan.

Park made the remarks at a press conference at the Hotel Shilla Jeju for the 44th KCCI Jeju Forum, an annual event hosted by the business lobbying group, on Wednesday.

Beginning on July 4, Japan started restricting exports to Korean of three key materials needed to produce semiconductors and displays in the wake of the Korean Supreme Court’s ruling that the 1965 bilateral treaty signed between Korea and Japan to settle colonial-era issues does not remove individuals’ rights to claim damages for wartime forced labor.

As the diplomatic issue has split over to the corporate sector, Park, head of an organization that represents businesses including chaebol, faced questions centered on the dispute at the press conference.

“Businesses should do their best to help Moon resolve the issue,” he said regarding his stance.

But the chairman did not blindly advocate for the president and his administration.

Moon and Cho Kuk, senior presidential secretary for civil affairs, have recently compared the current situation to the past when Koreans joined forces to fight against Japanese rule. The rhetoric has divided the public, with some people criticizing the government for taking such an emotional approach.

“Koreans are busy fighting over the rice bowl, when we are supposed to be concentrating on cooking the rice,” Park said.

“I may have a different stance and opinion [to Moon],” Park said. “But the time has passed for us to express different views, blame others and stir friction. Helping him cope with the situation will only do good to overcome the difficult time.”

Asked to elaborate, the chairman said, “Political, government and corporate communities should work together to tackle the situation rather than trying to find who is to blame.”

The chairman, who also heads Doosan Infracore, advised people not to label Japan’s export restrictions as an “economic retaliation” or “economic war.” But he said no when asked whether he had an answer to how the government could resolve the situation, adding he is not a “diplomatic expert.”

When a company picks a supplier, it takes into account the “technological edge,” “stability of quality” and “possibility of delivery on time,” he said. In this regard, Japanese suppliers had previously received positive feedback from Korean companies.

But the recent Japanese measures proved that Japanese products do not guarantee supply stability, the chairman said.

“Korean companies in need of materials must find new suppliers.”

He also advised Korean companies to diversify suppliers. Collaborating with foreign suppliers for research and development could drag up the date when Korean companies can localize production of some of the affected materials, he added.

“Various stages are needed for product development,” Park said. “We will be able to speed up with an open mind that we cannot go from stage zero to 100.”

Park asked the government and lawmakers to support companies trying to diversify their supply chain, adding that the occasion will have a positive impact on Korea when it comes to fostering businesses manufacturing materials and components.

“Even if a company tries to diversify suppliers, if it takes two years for the government to issue an approval for the imports, companies will find it difficult to invest,” he said. “We wish the government and the National Assembly will take action about the regulations.”

The chairman stressed that tackling short-term risks without considering long-term risks is “meaningless.”

“The situation is highly likely to reoccur in the future,” he said. “Companies should come out to produce fundamental, long-term solutions.”