How land and revolution led to Western hegemony

How land and revolution led to Western hegemony 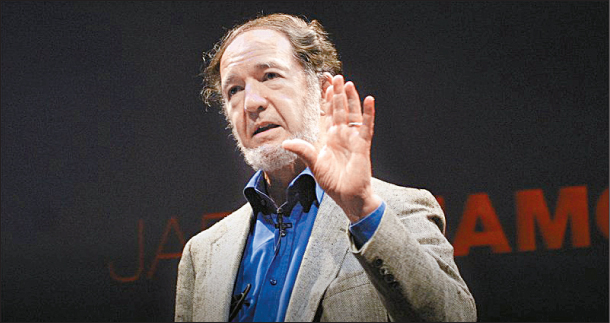 Many say generalists are gone and specialists are on the rise, and one scholar seems to scoff at this argument. For Jared Diamond, who is famous for his book, “Guns, Germs, and Steel,” the distinction between generalist and specialist and the boundary between studies are meaningless. As a socialist, biologist, psychologist, linguist, historian, anthropologist and geographer, he is the classic polymath of this era. He is also a well-known pro-Korea figure among intellectuals.

Diamond released his new book, titled “Upheaval.” In this book, two methodologies stand out. The first is the comparative method. He extracted the basics on how to overcome a crisis by referring to seven countries: Finland, Germany, Japan, Indonesia, Australia, the United States and Chile. The second methodology is crisis therapy. He applied the crisis therapy, which is designed to help individuals overcome difficulties, to nations and the world.

“Upheaval” suggests a 12-point framework to solve national crises and argues that there should be a national agreement on national problems. In order to solve problems, people should find the solution themselves rather than from others. People need to find the answer to what their national identity and core values are. Additionally, an honest, realistic and flexible discussion on finding successful cases of other countries to follow is necessary.

Prof. Diamond, for the last 60 years, has been researching the cause of the rise and fall of civilizations. As for now, “Upheaval” is his fourth and final book after releasing “Guns, Germs, and Steel” in 1997, “Collapse” in 2005 and “The World Until Yesterday” in 2012. Bill Gates also recommended “Upheaval” as a top five must-read book for the summer of 2019. Curious on how he captivated Gates, the JoongAng Ilbo interviewed Diamond via email.


Q. What were some interesting reactions to “Upheaval”?

A. The most interesting reactions to my book “Upheaval” have been in the United Kingdom, because of the increasingly acute crisis of Brexit. During my recent book tour of the United Kingdom, all interviewers eventually turned the interview to asking my opinion about Brexit. Brexit does provide a good example of my framework: It’s a crisis made worse by the refusal of most leading British politicians today to conduct an honest self-appraisal of Britain’s current problems.

The other particularly interesting reaction to my book has been from people in the business world, who recognize that not only personal crises and national crises but also business crises may be illuminated by my 12-point framework.

In Asian philosophical and religious traditions, there is almost no argument or emphasis about the end or collapse of the world. Do you think such sense of imminence has helped the West achieve hegemony?

No, I don’t believe the West’s hegemony has been influenced by Western talk about the imminent end of the world. Instead, the hegemony of the West is attributable to clear geographic and historical factors: The greater variety and productivity of domesticable plants and animals in the Fertile Crescent compared to East Asia; as a result, earlier origins of the ingredients of power — state government, metal tools and writing — in the West than in East Asia; and the geographic fragmentation of Europe contrasting with the geographic unity of China, resulting in Europe’s constant political fragmentation, China’s persistent unity, and resulting in greater competition and greater opportunities for inventors in Europe than in China. I developed this argument in the epilogue of my book “Guns, Germs, and Steel.”

The world is a result of revolutionary changes. Europe went through democratic, scientific, industrial and geographic revolutions. Why do you think all these revolutions occurred in Europe and not in other continents?

Europe has constantly been going through revolutions, because Europe today is divided into 50 countries, and in the past it was divided into several hundred self-governing units, each of them a separate experiment in democracy, science and industry. Those experiments competed with each other. In contrast, China’s geographic unity meant that China has usually been governed by one central leader. When the central leader has good policies — such as China’s decision to remove lead from gasoline — China was able to adopt those good policies more rapidly than has Europe. But when a Chinese leader adopts disastrous policies — such as the great Cultural Revolution, or the decision to abolish China’s educational system, and send teachers and professors to the fields to work next to peasants — the result has been disastrous for China. Both China and Europe have had idiotic leaders. But Europe has never had an idiotic leader able to abolish the educational system of all of Europe, whereas China did have such an idiotic leader recently.

In your new book “Upheaval,” “American exceptionalism” is a big problem. I think the United States is not the only country marked by exceptionalism. What has to be done to make exceptionalism a positive factor to prevent collapse?

Korean reunification can solve many of the two Koreas’ and East Asia’s problems. Reunification, however, can also aggravate problems. What should Koreans do?

If Korea should be so fortunate as to have the opportunity to reunify, do what Germany did in 1990: Reunify! Yes, reunification of Germany caused problems that persist today, resulting from the economic and social differences that developed between East and West Germany during the decades when Germany was divided. A reunified Korea will face even bigger economic and social problems. But — it’s for you Koreans to decide whether reunification would be worth paying the price of having to overcome those economic and social problems. I hope that you get the opportunity to decide!

Will China, in the end, espouse Western-style democracy?

China has never espoused Western-style democracy since it was first unified in 221 B.C. Ultimately, I think that that’s because of the paradoxical disadvantage of China’s geographic unity that I explain above. As a result, I think that it’s unlikely that China will espouse Western-style democracy in the foreseeable future in the next 2,240 years. I consider it unlikely that China will surpass the West economically and politically in the foreseeable future: Because democracies, despite their obvious disadvantages, such as Brexit and Trump, have decisive advantages over dictatorships. It is easier in a democracy than in a dictatorship to change idiotic policies of an idiotic leader. There is still hope that the United States will be able to change the idiotic policies of our President Trump — more hope than China has of changing policies of its current government.

Is there one last thing that you would emphasize to the Korean readers of “Upheaval”?