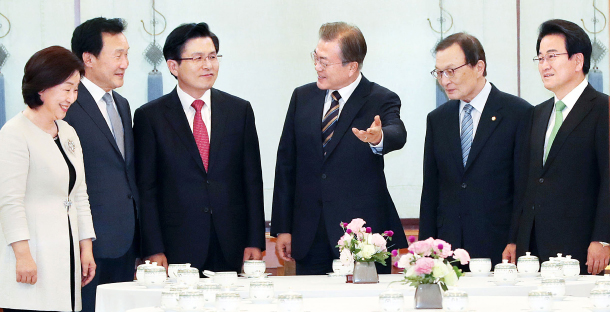 President Moon Jae-in and political leaders on Thursday discussed Korea’s handling of Japan’s new export restrictions and their snowballing impact on the economy.

Moon and the heads of five major political parties sat down for a rare meeting at the Blue House for about three hours to discuss cooperation from both sides of the aisle after Japan restricted exports of three materials crucial for the production of semiconductors and displays.

According to a joint press statement announced by their spokespeople after the meeting, ruling and opposition leaders urged Moon to make diplomatic efforts to resolve the situation.

“The president expressed his consensus and agreed to prepare substantial measures,” the statement said.

It remains to be seen what diplomatic efforts the government will make. Political demands have been made that Prime Minister Lee Nak-yon be sent to Japan as a special envoy, and opposition leaders made that specific request to Moon at the Thursday meeting.

According to Blue House spokeswoman Ko Min-jung, Moon told his political counterparts that he has never ruled out the possibility of diplomatic resolutions, including presidential diplomacy and sending a special envoy.

At the beginning of the meeting, the main opposition leader Hwang Kyo-ahn made a straightforward demand that Moon stop fueling anti-Japan sentiment and find a diplomatic resolution. He recommended holding a summit with Japanese Prime Minister Shinzo Abe to resolve the conflict through a “top-down” approach.

“Instead of presenting an actual measure, the government is fueling the people’s sentiments,” Hwang, chairman of the Liberty Korea Party (LKP) said. “But words and emotions will resolve nothing. At the end of the day, only the state leaders of the two countries can resolve core issues. You must push forward a summit as soon as possible.”

Sending a special envoy to Japan and seeking U.S. mediation were also proposed by Hwang.

He also pressured Moon to scrap other controversial policies, particularly income-led growth policies and a labor reform plan, to strengthen the country’s economic fundamentals, and to sack foreign affairs and security officials who failed to foresee Japan’s economic retaliations despite warnings over the past months.

Hwang also asked Moon to stop his campaign to “eradicate accumulated evils” of past governments, which the opposition sees as a political revenge aimed at its two conservative predecessors. “It is not the time for the president to fight against the opposition party,” he said. “To overcome a crisis, political cooperation is critical.”

It was the first time that Moon and Hwang sat down to discuss state affairs since Hwang, the last prime minister of the previous Park Geun-hye administration, was elected chairman of the largest opposition party in February.

In their opening remarks, Sohn, also a conservative, urged Moon to meet with Abe to resolve the snowballing row.

Two other opposition leaders, Chung and Sim, however, recommended Moon step up Korea’s responses. Sim even suggested that Moon consider scraping the General Security of Military Information Agreement if Japan continues its retaliations.

Sohn, Chung and Sim all echoed Hwang in recommending Moon send a special envoy to Japan.

Moon started the meeting with an opening statement asking for the political leaders’ cooperation.

“I believe this meeting will give hope to the people in this troubling time,” Moon said. “If we can produce an agreement on key issues and a joint countermeasure, the people will feel more assured. It will strengthen the negotiation powers of the government and companies.”

Moon said the most urgent priority was Japan’s export restrictions. He said he wanted to discuss plans to reduce Korean industry’s reliance on Japanese components and materials, and try to end the diplomatic row as soon as possible and restore bilateral relations.

He also urged the political leaders to pass a supplementary budget bill stuck in the National Assembly.

After the meeting ended at the Blue House around 7 p.m., spokespeople of the presidential office and the parties drafted a joint press statement and announced it together.

Moon and the five leaders agreed that Japan’s measures are “unfair economic retaliations,” the statement said. They also urged the Japanese government to immediately recant the economic retaliation and warned that any additional measures will damage bilateral relations and security cooperation in the Northeast Asia, calling for Tokyo to start efforts to find a diplomatic resolution.

An emergency cooperative body joined by the government and political parties will be established to address the situation.