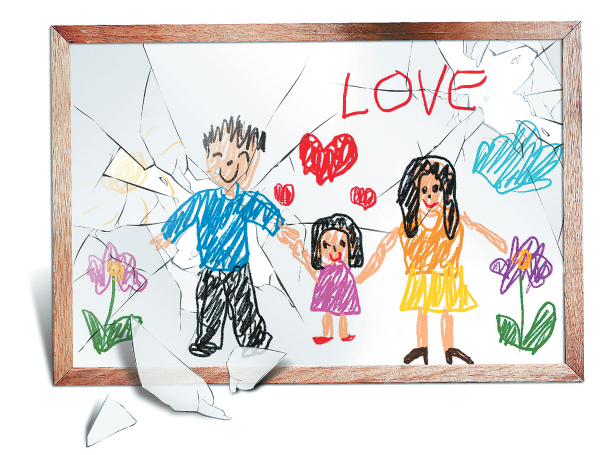 Kim Sung-kwan, 37, had a habit of telling lies.

He told his wife and his in-laws that he was working at a well-known company and was about to inherit a fortune from his grandfather, but in reality, he was relying on money from his mother.

Unable to deal with her son any longer, Kim’s mother drew a line and told Kim that she could not give him any more money. Kim grew furious with her and his family. He created a plan with his wife to murder his mother, stepbrother and stepfather.

“We can buy time to get away by killing everyone in the family,” Kim said to his wife.

Kim went to his parent’s house in Yongin, Gyeonggi, on Oct. 21, 2017, and killed his mother and stepbrother. To confuse police, he sprayed flour over the bodies and covered the bodies with a blanket.

“Two down, one to go,” read Kim’s message to his wife.

Later that day, Kim killed his stepfather and took 120 million won ($102,625) from his mother’s bank account. He fled to New Zealand with his wife and two children. Kim was arrested by New Zealand police and was extradited to Korea 80 days later.

Kim was sentenced to life in prison by a Korean court.

The number of crimes toward family members is on the rise, as the number of people arrested for the murder of a family member increased from 60 in 2015 to 91 in 2018, according to data from the Supreme Prosecutors’ Office. From January to April, 32 people have been arrested for killing a family member and experts estimate this number will surpass 100 by the end of the year. The number of people arrested for domestic violence increased from 988 in 2014 to 2,414 in 2018, doubling in just four years. Criminal psychology experts said that there are many cases where people take out their stress and anger on their families.

“Families are people that a lot of these criminals rely on and lean upon, but at the same time they see them as a target to vent their emotions,” said Soung Jea-hyen, a team leader of the International Cooperation Center at the Korean Institute of Criminology.

Depression and schizophrenia also influence people to murder their families. A 57-year-old man suffering from dementia caused by long-term excessive consumption of alcohol murdered his wife in December 2018. The man later testified that he “committed the crime after hearing things.”

According to Article 250 of the Criminal Act, a person who kills one’s own or any lineal ascendant of one’s spouse shall be punished by death, life imprisonment or a prison sentence for no less than seven years.

In a case from 2011, a man who murdered his father filed a constitutional appeal to the Constitutional Court. The court made a decision to reject the man’s appeal and replied, “It is a sin that was committed against one’s parent, which gives the crime sufficient reason to be criticized by society.”

In cases where parents were murdered by their own children, many of the children were going through financial difficulties and the helpless parents were an easy target for them.

In May 21, the rotting body of a man in his 50s was found in a house in Gwonseon District in Suwon, Gyeonggi. However, the body of the man was not alone. The man’s 26-year-old son had been living in the same house since he killed his father in 2018.

The son testified to police that he punched his father to death after arguing over drinks. He lived in the house for five months with the body in the bathroom. Police referred the case to the prosecution on charges of parricide. Although the reason for the son murdering and leaving his father’s body in the house for months is unknown, police said that the two did not have proper jobs and lived in poverty. 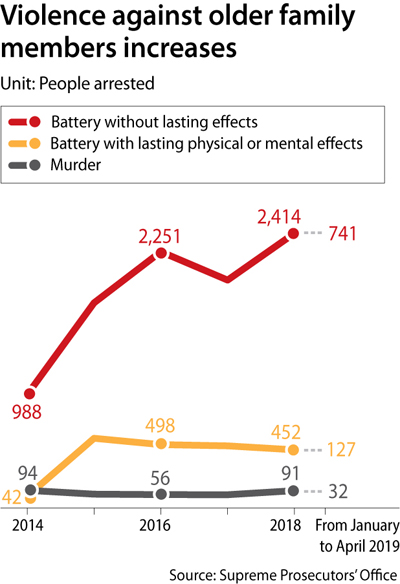 In 2017, a son murdered his father and stabbed his mother several times in Daegu. When he was arrested, the son told police that he killed them due to the burden he felt supporting his family. His father suffered from chronic kidney disease and his mother had breast cancer. The son was said to have complained about financial difficulties and was suffering from depression.

Some see the problem as caused by economic instability in the families. Experts said that cases of children targeting their parents are increasing in families that live in poverty.

“Even if there are problems between parents and their children, there is room for the conflict to be resolved if families have financial stability or if there is hope that conditions will improve,” said Kwack Dae-gyung, a professor at Dongguk University’s College of Police and Criminal Justice. “However, in the case of families living in difficult conditions where there is no hope for improving their situation, there is a high chance the family members’ frustration will be taken out on their weak parents in extreme ways.”

Some experts blame Korea’s culture of close family ties for this.

“Compared to families that maintain a fair distance from each other, families where parents and their children are too close tend to be involved in serious crimes,” said Bae Sang-hun, a former police profiler. “The possibility of various conflicts exploding [out of hand] increases as it is not only the physical distance [that is close], but the psychological circle that constricts parents or children with the responsibility of taking care of their family.

“In order to prevent extreme conflict, parents and children must respect each other’s privacy,” Bae added.

Experts say people must not ignore signs of domestic violence and child abuse.

Korean culture also sometimes regards domestic violence and child neglect as a “family problem” that police do not have to intervene in.
A 15-year-old tried to commit suicide in 2018 because he was being neglected by his stepmother, and would often have to spend a whole day without a meal. His stepmother was said to have only taken care of his step-sibling, to whom she gave birth to.

“It isn’t that we didn’t take care of him, but that he refused, and this is a family matter,” said the boy’s father when the Korea Association for Prevention of Child Abuse and Neglect contacted him. “What kind of abuse is it if we didn’t beat him?”

Police are also frustrated, as it is hard to acquire evidence on crimes committed against family members. Victims also frequently change their testimony and say that they want charges dropped.

“Last year, a call came in saying that a mother with anger management issues disciplines her child with a knife,” said a police officer. “It was frustrating when we were dispatched to the scene, as the child who said he was scared of his mother changed his testimony, saying he didn’t want to be separated from her.”

According to police statistics, there were 248,660 reports of domestic violence to the police number 112 in 2018. Of the cases, only 41,720 led to a booking and over 200,000 cases were passed on due to insufficient evidence or because the victim did not want the perpetrator to be punished.

Article 327 of the Criminal Procedure Act does not allow a case to be prosecuted when “the injured party declares his/her intention not to prosecute a case.”

To solve this problem, a revision of the act was proposed in March that makes it possible for the court to punish domestic violence perpetrators regardless of the victim’s intentions. However, the revision is still being discussed. Experts said a solution to the problem is reducing the number of steps to put victims into protective custody and strengthening the authority of organizations, like the police, that are sent to scenes of domestic violence.

“Temporary emergency measures by the police are only effective for 48 hours, and in order to prolong their effects, we need the authorization of the prosecution and the court,” said Lee Eun-gu, the section chief of domestic violence measures at the Korean National Police Agency. “The authorization sometimes takes over 10 days. A review is needed to find a way for police to take matters into their own hands and later get orders from the court.”