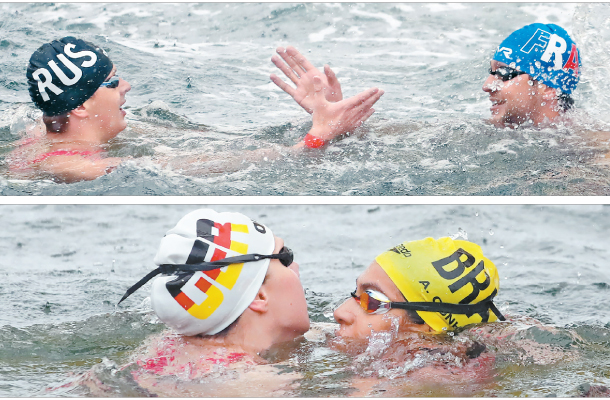 Top: Winner Axel Reymond of France, right, and runner-up Kirill Belyaev of Russia, left, congratulate each other. Above: Winner Ana Marcela Cunha of Brazil, right, hugs runner-up Finnia Wunram of Germany, at the finish line in Yeosu on Friday. [YONHAP]

Cunha got off to a strong start by leading the pack in the first split, clocking 14 minutes and 16.1 seconds. Although she fell behind to fifth by the 10th split, she quickly regained her lead by the 16th split, reaching the point in 4 hours, 1 minute and 48.3 seconds. She once again lost her lead in the next split, but Cunha sprinted in the last section of the race to defend her title for the third time, clocking 5 hours, 8 minutes and 3 seconds.

With the win, Cunha picked up her second gold at the 2019 World Championships, as she previously won the women’s 5 kilometer open water race. Looking specifically at the 25 kilometer event, this was her fourth gold at the world championships, winning it in 2011, 2015, 2017 and 2019.

Finnia Wunram of Germany finished in second by clocking 5 hours 08 minutes and 11.6 seconds followed by Lara Grangeon of France in third, as she finished her race in 5 hours, 8 minutes and 21.2 seconds.

Having started his race with a lead in the first split, Reymond slipped from the lead by the 10th split as he fell to 12th by clocking 2 hours, 23 minutes and 54.5 seconds. By the 14th split, Reymond dropped further back in the race to 17th but slowly made his way back towards the leading pack. Making his way to fifth by the 19th split, Reymond sprinted in the last section of the race to finish at the top at 4 hours 51 minutes and 6.2 seconds, a close 0.3 second ahead of the silver medalist. With the win, Reymond successfully defended his title in the event.

The 25-kilometer open water race is by far the most grueling of all the swimming races at the FINA World Championships, requiring swimmers to keep moving for nearly five hours or longer. Because of the extreme physical challenges involved in the event, swimmers enjoy a sense of camaraderie and mutual respect that was evident as they crossed the finish line on Friday.

Regardless of who won or lost, swimmers congratulated and embraced each other, with Cunha, the winner in the women’s race, turning to hug silver medalist Wunram and her teammates despite them being rivals only minutes earlier.