Korean water polo players express their gratitude by waving to the crowd after they finished the last preliminary game against Canada on Thursday at the FINA World Championships at Nambu University water polo stadium in Gwangju. [YONHAP]

When the Korean women’s water polo team arrived at its first FINA World Championships, the players set a realistic, if modest, objective: score one goal.

Not only have they pulled that off, these neophytes have accomplished something more significant: Korea has been improving with each passing game.

Kyung Da-seul and Lee Jung-eun each scored a goal in Korea’s 22-2 loss to Canada on Thursday at Nambu University Water Polo Competition Venue in Gwangju. It was Korea’s third straight loss in Group B action, but the team has cut the deficit from 64 to 29 to 20, while increasing its goal total from zero to one and two.

Kyung has now scored in back-to-back games. And Lee joined her close friend on the score sheet. Both goals came in the fourth quarter. 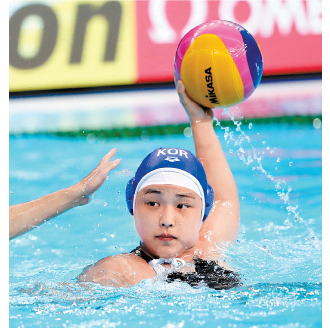 “I am really tight with Da-seul and when I saw her score, I started thinking I wanted to join the party, too,” Lee said. “I had an open look on the wing, and I got a perfect feed.”

The devastating 64-0 loss to Hungary in Tuesday’s opener is a distant memory for these young players. Lee said the post-game meeting on Tuesday focused on moving forward.

“We talked about how we have to show fans our progress with each game,” Lee said. “I think we’ve done really well in that regard. I am quite happy about that.”

In the fourth quarter, Canada let its goalkeeper, Claire Wright, venture out of her position to join the attack. Head coach David Paradelo later told Yonhap News Agency that he wanted every player to have at least one goal, and Wright ended up scoring.

Lee said she was caught off guard by that strategy. The Koreans already had their hands full, down 17-0 through three quarters, and now they had to contend with seven attackers.

“Even though we gave up a few goals in those situations, I think we defended relatively well,” Lee said. “We did some of the things we’d practiced.”

Korea finished last in Group B with this loss and will face South Africa, the last seed from Group A, in the 13th-16th place semifinals on Saturday.

South Africa is in pursuit of its first world championships victory in its sixth appearance. The African side scored five times and allowed 76 goals in the preliminary round.

Lee said Korea will aim high in the next match.

“We’ll try to score about five goals,” she said. “We have a lot of good shooters on this team. I hope they’ll convert as many shots as possible.”