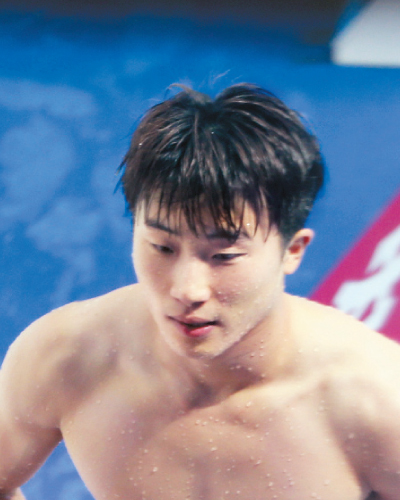 Korean diver Woo Ha-ram placed fourth in the men’s 3-meter springboard at the world championships on Thursday, matching his best performance at the biennial competition.

Woo scored 478.80 points after six attempts at the FINA World Championships in Gwangju, falling one spot shy of a medal once again after finishing fourth in the 1m springboard earlier.

By qualifying for the 3 meter springboard final here, Woo clinched a spot at next year’s Tokyo Olympics.

A medal in Gwangju would have been icing on the cake.

And Woo hung around in the top five through his first four dives, which included an excellent 91.20 in the third round.

Woo scored only 47.25 points in the fourth dive to take himself out of the race, and the competition was too much for the Korean.

Xie Siyi of China defended his gold medal with some shocking drama in the final round. Jack Laugher of Britain was sitting pretty at the top after five dives, holding a 31.10-point lead over Xie. But Laugher had a disastrous final dive, entering the water on his back and scoring just 30.60 points to finish at 504.55 points.

Woo scored a career-high 99.45 points in his final round, but still ended up 25.75 points out of the podium.

He said afterward he was mostly satisfied with his performance, and he doesn’t have regrets, even though Laugher’s collapse may have given Woo a shot at a medal with a better fourth dive.

“I don’t think I would have gotten the bronze just because Laugher made his mistake at the end,” Woo said. “If I had done better in my fourth dive, maybe he wouldn’t have made any mistake in his final attempt. I am happy with how my final went today.”