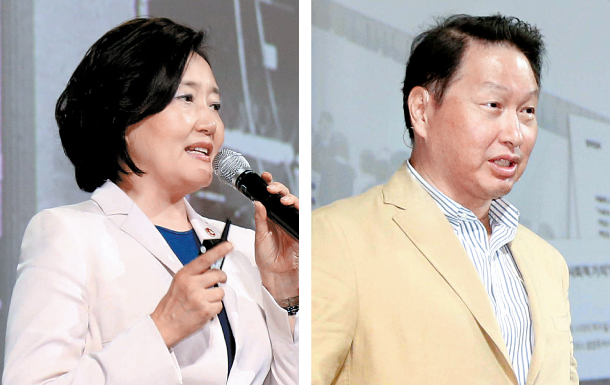 Park Young-sun, minister of SME and startups, left, and Chey Tae-won, SK Group chairman, give lectures at the Korea Chamber of Commerce and Industry’s Jeju Forum held at the Shilla Hotel on Jeju Island on Thursday. [NEWS1]

A minister and tycoon faced off publicly on the issue of export restrictions by Japan - and Korea’s own ability to make one of the restricted materials, hydrogen fluoride.

During a speech at the Korea Chamber of Commerce and Industry’s Jeju Forum Thursday, SME and Startups Minister Park Young-sun said that she had asked local SMEs why they couldn’t produce the materials Japan is restricting, such as hydrogen fluoride, which is the so-called etching gas used in semiconductor production.

They told her they can, Park claimed.

“But [the problem is] conglomerates are not buying,” Park said. “While the conflict with Japan is a crisis, it is also an opportunity,” she added.

“Conglomerates can’t make all the key components,” she said, suggesting that these components should be developed and manufactured by Korean SMEs.

After the speech, SK Group Chairman Chey Tae-won was corralled by reporters and asked about the minister’s charge. Chey said that while Korean companies are capable of manufacturing hydrogen fluoride, the big problem is quality.

“Semiconductors are even made in China, but the question is what the purity [of the etching gas] is,” Chey said.

“The hydrogen fluoride needs to meet a certain standard, but Korean companies haven’t reached that level of detail.”

Chey told reporters he will visit Japan to deal with the trade crisis if he has to.

Later, the minister fired back on her Facebook feed that Korea wouldn’t be in its current situation if conglomerates had helped Korean SMEs over the last two decades.

“I read an article on my way to the airport after attending the Korea Chamber of Commerce and Industry’s Jeju Forum that the problem with Korean SME’s hydrogen fluoride is the quality and purity,” Park wrote. “What could our current situation have been if conglomerates and SMEs researched, developed and invested together 20 years ago?”

Since the trade battle between Korea and Japan began, Park has been championing Korea’s independence in material and components.

Hydrogen fluoride is a key material for the production of semiconductor chips and is one of three exports the Japanese government has restricted since July 4. Korea’s two leading semiconductor manufacturers - Samsung Electronics and SK Hynix - have been trying to diversify their supplies of hydrogen fluoride.

Korean companies are said to have three-month stockpiles of the restricted materials.

Chip production could be threatened in Korea, and Samsung and SK as of the end of last year held a combined 73 percent market share in DRAM chips. They have a combined market share of 45.6 percent in the world’s NAND flash chips.

Although Samsung and SK could secure supplies from elsewhere, the most pure hydrogen fluoride - 99.999 percent pure - comes from Japan.

Supplies with purity of 99.9 percent or 99.99 percent are available from elsewhere, but lower purity leads to more faulty chips, which erodes overall quality and slows down assembly lines.