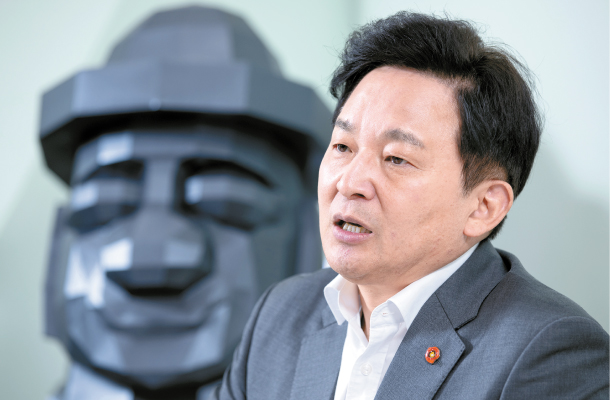 With opposition to the second airport on Jeju Island and the recent tension between Korea and Japan that is expected to affect Jeju’s tourism industry, Jeju Gov. Won Hee-ryong is facing a considerable amount of headwind.

With the global recession affecting cities around the world, Won said that he is going through the most difficult situation in his five years of governing Jeju.

Won believes easing restrictions can be a solution to the island’s problems. He requested the government minimize the obstacles that industries face and be active in solving problems on the island that the Jeju provincial government cannot solve by itself.

One such problem is the Greenland International Hospital in Seogwipo, Jeju Island, which was supposed to be Korea’s first for-profit hospital. The opening of the facility was delayed for more than a year during which all nine doctors in charge of the plastic surgery, dermatology, internal medicine and family medicine departments quit. Won announced the revocation of the facility’s establishment in April.

A former prosecutor and three-term lawmaker, Won became governor of Jeju Special Self-Governing Province in 2014. A native of the scenic tourist island, Won graduated from Seoul National University’s College of Law and received media attention for ranking first in the College Scholastic Ability Test and the National Judicial Exam.

Won sat for an interview with the JoongAng Sunday earlier this month in his office in northern Jeju to talk about building a second airport, the future of the island and the easing of restrictions by the government.

Q. How is the economic situation on Jeju Island?

A. The industrial structure on Jeju Island is overwhelmingly dominated by three areas: tourism, construction, and primary industries like farming and fishing. Tourism was affected by the recession, which affected lodgings and restaurants.

The slump in primary industries and the 52-hour workweek can really be felt. Investments from abroad, in real estate and construction during the past five years led to the island’s growth so much so that we worried about it becoming overheated. However, investments were reduced around 25 percent this year compared to last year. The annual growth rate of Jeju Island is normally at 6 percent, but we estimate it will be 4 percent this year. The growth rate is still higher than the national average. But as our upwards trajectory has stopped, economic units that were at their limits are now experiencing difficulties.

There is concern about the decreasing number of tourists due to unfavorable relations between Korea and Japan, which came right after recent tensions with China.

There was a margin for growth when China eased retaliations against Korea for the installation of the Terminal High Altitude Area Defense (Thaad) antimissile system in Korea, but uncertainties persisted amid the U.S.-China trade war. The number of Japanese tourists was on the rise, but with Korea-Japan relations worsening, we cannot find a way to recover from our recession. We are bracing ourselves for a difficult period for the time being.

What parts of Jeju’s industries are you trying to focus on and develop?

We are trying to make a sustainable growth engine for the future by protecting Jeju Island’s natural environment and using our strengths as a free international city and special self-governing province. First, we are carrying out a “carbon free island” project that focuses on renewable energy and electric vehicles. The use of electric vehicles has grown rapidly in the past five years. We have even installed an electric vehicle battery recycling center for used batteries. We plan to actively use revolutionary technologies of the fourth industrial revolution like blockchain, big data and artificial intelligence. By using this to create an innovative test bed, we are planning to share the results worldwide by carrying out a “sharing and connecting platform industry.”

Why have you been fighting to ease government regulations?

Innovative industries cannot help but receive regulations as so-called monsters and obstacles. The Moon Jae-in administration calls itself a progressive government but is not progressive when it comes to technology. If we had been afraid of the possible side effects of innovation, how would the automobile or aviation industries have risen up the position they are in today? Managing the dangers and side effects that come from the process of innovating is, in itself, another competitive trait. The government always emphasizes innovative growth, but what I see out in the real world is a lack of competitiveness and urgency, growth limited to theory alone and companies’ demands not being reflected in the industries.

In the case of easing restrictions on electric vehicles, the government says that it will certify the documents that the companies prepare after they look through them. A negative system that allows everything except for government-imposed restrictions is only talked about. In reality, when we tell the government to implement such a system, the government disapproves.

Why is the creation of a second airport in Jeju Island making slow progress?

Arguments that insist on preventing the destruction of the environment in the process of constructing the airport and facilities that protect the environment, such as proper waste and sewage treatment facilities, are reasonable. However, when I listen to people who oppose its construction, I feel that the goal post keeps moving around. First, they said that the location was wrong. Then, it was the environmental capacity and that we shouldn’t allow more tourists to visit the island.

Environmentalists who ask, “What will we do if the number of tourists doubles, when we cannot take care of the environment right now?” are oversimplifying the problem. The Jeju International Airport is already crammed with people. There are also problems regarding safety. That is why I am trying to create a second airport. As governor, I will not neglect or push off my responsibilities.

The Jeju Special Self-Governing Province was a title that was given to Jeju Island during the Roh Moo-hyun administration. What has happened since receiving the title?

Since Jeju was named a self-governing province in 2006, there have been large-scale development investments invested into the island, but questions were raised about the developments destroying the environment and the lack of waste management and sewage disposal facilities.

There were also people who pointed out that we were only focused on mass development without securing social overhead capital (SOC), such as airports. That led to an increase in anxiety and feeling of fatigue among residents regarding the destruction of the environment. However, the current government that has followed in the footsteps of the Roh Moo-hyun administration has not been trying to actively solve these problems. They are, instead, siding with environmentalists and political opponents, or are sitting back and watching to see what others are thinking.

The government is also pushing for the construction of a second airport on Jeju Island, but a situation is unfolding in which the ruling Democratic Party is against the idea. They assert democracy, but political responsibility is nowhere to be found.

The Moon Jae-in administration stressed decentralizing power and securing assets for local governments. What do you think about this?

The fact that finance is at the core of self-government and decentralization is true. I think that the current government’s pledge to transfer the existing central budget to regional areas is being fulfilled in a way. However, as Jeju Island is a special self-governing province, I would like for the province to be affected in a groundbreaking way that is in accordance to its status.

The recent issue of the Greenland International Hospital was not a problem that Jeju’s local government could solve alone and was instead the central government’s problem. It was a problem of jobs, investment and innovative growth, but the government was consistent in its uncooperative and disengaged stance.