Man self-immolates next to Japan’s embassy

Man self-immolates next to Japan’s embassy 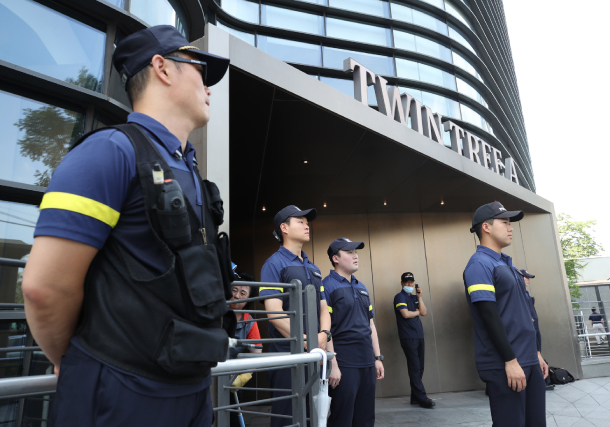 Police stand guard in front of a building in central Seoul, where the Japanese Embassy in Korea is located, on Friday following the death of an elderly man by self-immolation earlier that day. [YONHAP]

A 78-year-old Korean man died after he set himself on fire in front of the Japanese Embassy in downtown Seoul on Friday amid escalating tensions between the two countries following Tokyo’s recent trade restrictions against Seoul.

According to police, the man, only identified by his surname Kim, slowly drove a white van toward the building which houses the Japanese Embassy and Consulate in Jongno District, central Seoul, at around 3:24 a.m. on Friday. Police officers guarding the building heard a loud explosion from the vehicle and the man was instantly engulfed in flames.

Police and firefighters extinguished the blaze in 10 minutes before pulling Kim out of the car.

He sustained severe burns to his face, chest and arms and was brought to a nearby hospital. He was later transferred to a different hospital which specializes in treating burns but died while receiving treatment at an intensive care unit.

Officers said they found a lighter, about 20 butane gas cans and two 20-liter plastic gas canisters inside the van which Kim is said to have borrowed from his friend on Thursday. According to police, Kim told his friend that he needed the car because he had something to do.

Kim apparently did not leave behind a suicide note. Police said digital forensic experts are about to analyze Kim’s cell phone for further clues about his motive.

Police said the man’s family told them Kim’s father-in-law was a victim of Japan’s forced labor during World War II, although this is still not confirmed.

Police also said the man called his friend before the incident and said he was about to set himself on fire because he hated Japan.

Two more police officers were dispatched to the entrance of the building housing the Japanese Embassy on Friday after the fire, bringing the total number of officers guarding the establishment to 20.

The Japanese Embassy and Consulate occupy the eighth to 11th floors of the 17-floor building, known as Twin Tree A.