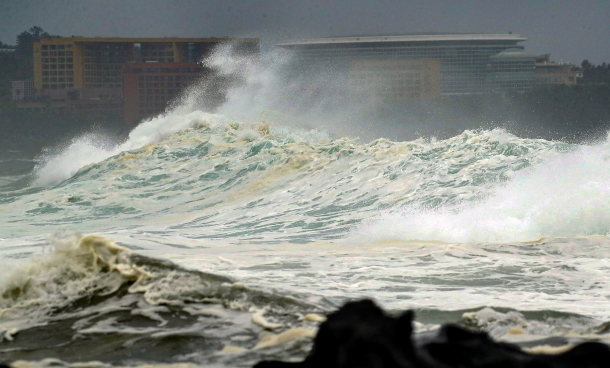 Waves crash on the shore of Seogwipo in southern Jeju Island Friday as the country braced for Typhoon Danas, which was expected to bring heavy rain and strong winds across Korea today. [YONHAP]

Jeju Island and areas on the southern coast were the first to catch the brunt of Typhoon Danas Friday, experiencing strong winds and heavy rain.

By Friday 4 p.m., the typhoon was in waters 430 kilometers (267 miles) southwest of Jeju Island’s southern city of Seogwipo, heading northeast towards mainland Korea at a speed of 16 kilometers per meter (10 miles per hour), said the Korea Meteorological Administration (KMA).

Typhoon Danas was expected to reach the country’s southern coastline this morning and continue traveling northeastward toward the East Sea. The KMA expected the typhoon to arrive at the eastern coast by Saturday 9 p.m., though rain was likely to fall in many areas for several more hours. 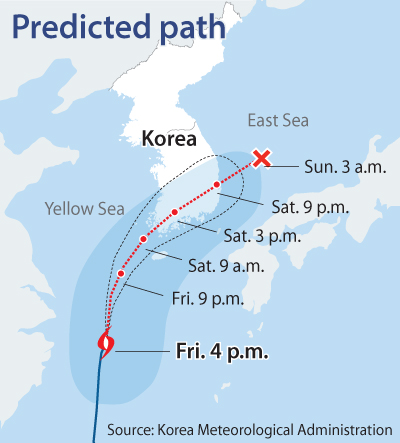 The KMA spokesperson warned Jeju and some other mountainous regions near the southern coast, such as Mount Jiri, of landslides and flooding from Friday night to Saturday daytime, saying that in the worst hours, those areas could be pounded with 50 millimeters or more rain per hour.

As the typhoon nears mainland Korea, winds will also grow faster. The wind speeds in Jeju, South Jeolla and South Gyeongsang will reach about 54 to 72 kilometers per hour.