Korean divers hope to develop the sport at home

Korean divers hope to develop the sport at home

GWANGJU - Korean divers Kim Su-ji, 21, and Kim Ji-wook, 18, were not fully satisfied with their performance in the 3 meter springboard synchronized mixed diving competition on Saturday, but they hope to return with a more impressive performance in the next world championships.

“I’m not fully satisfied with the overall performance, but I think it’s meaningful that we are the first Koreans to have competed in 3 meter springboard synchro mixed,” Su-ji said during an interview following her event on Saturday. She became the first Korean diver to snatch a bronze medal for the 1 meter springboard event on July 13, though the event isn’t part of the Olympic Games. 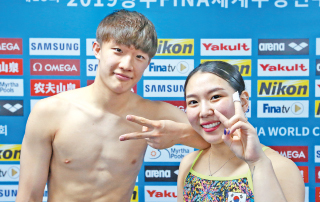 Ji-wook said, “I’m sad that we made a mistake during our fourth dive, which we usually do well on. But I’m glad I was able to meet a lot of great divers in Gwangju, and I’m happy that everything is over.”

The duo came in 15th place out of 18 teams. The top three spots were taken by Australia, Canada and Germany.

Su-ji and Ji-wook only trained for the synchronized mixed event several times after confirming their decision to team up a month ago.

“Since the 3 meter springboard synchro mixed was more like an [special] event competition, we focused mostly on just taking part. I [mostly] concentrated on the routines that are part of the Olympic Games.” Su-ji added, “But I think we did well on synchro.”

On Saturday, the pair received cheers throughout each round of diving as well as after the competition ended. They were happy and grateful about the encouragement, but were also confused about the unexpected excitement.

“[The spectators] were shouting to cheer us on before we dived. We were extremely grateful and happy for receiving such encouragement, but it confused us at first. It may have affected us [and caused us] to make mistakes,” said Ji-wook.

“Since we were doing synchro diving, we [usually] chant a slogan before we jumped. The cheering made it difficult for us to hear each other.” Su-ji added, “But that doesn’t mean we didn’t enjoy being cheered on.”

Su-ji hopes to recover people’s faith in her performance.

“I hoped to leave [a] positive impression on people, but I’m afraid I may have left doubt for not having been able to obtain a medal during the Olympic-qualifying routines. But it’s not over, and I hope to regain people’s faith at the [FINA Diving] World Cup,” said Su-ji.

Ji-wook said, “Although I haven’t yet competed in an event that will give me a ticket to the Olympics, I hope to return [to world championships] even better next time.”

Su-ji has hope in the overall development of diving in Korea.

“There are only around 200 divers in Korea. China has its own professional diving school. Although that’s not [the level] we expect, we hope more people can understand the fun of diving once they start paying attention to the sport,” said Su-ji.

“I think Korean divers are continuously improving, and getting closer to the world rankings. I hope our performance encourages younger divers to compete at world championships.”