[5G Future] Ahead in 5G, Korea leads in smart city innovation and exports

[5G Future] Ahead in 5G, Korea leads in smart city innovation and exports 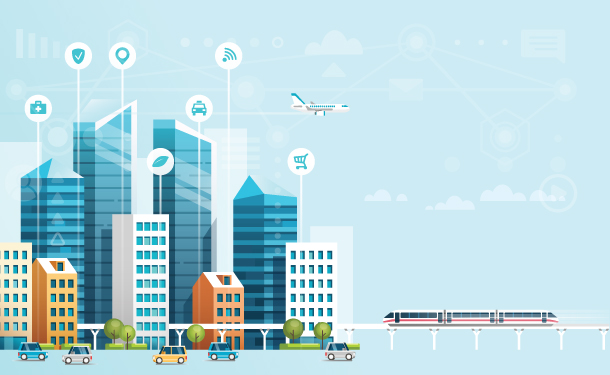 “Transportation, accident prevention, administrative processes, medical services and child care services, which have historically operated independently, will be connected more organically and efficiently.” Moon said. “With consolidated safety management systems, disaster information - like that related to earthquakes and fires - will immediately be sent out by alert, and this will reduce firefighter response time by five minutes, while the crime rate will drop 25 percent and vehicular accidents will be reduced roughly 50 percent.”

The event introduced details of two test beds that the current administration has chosen as smart cities.

Busan’s Eco-Delta City was selected as a city that will specialize in water management and robotics and Sejong’s 5-1 Life Zone was chosen as the city specializing in AI.

The government said it will invest 3.7 trillion won ($3.1 billion) in the two smart cities, which will be breaking ground later this year, with a goal of having the first residents move in around late 2021. 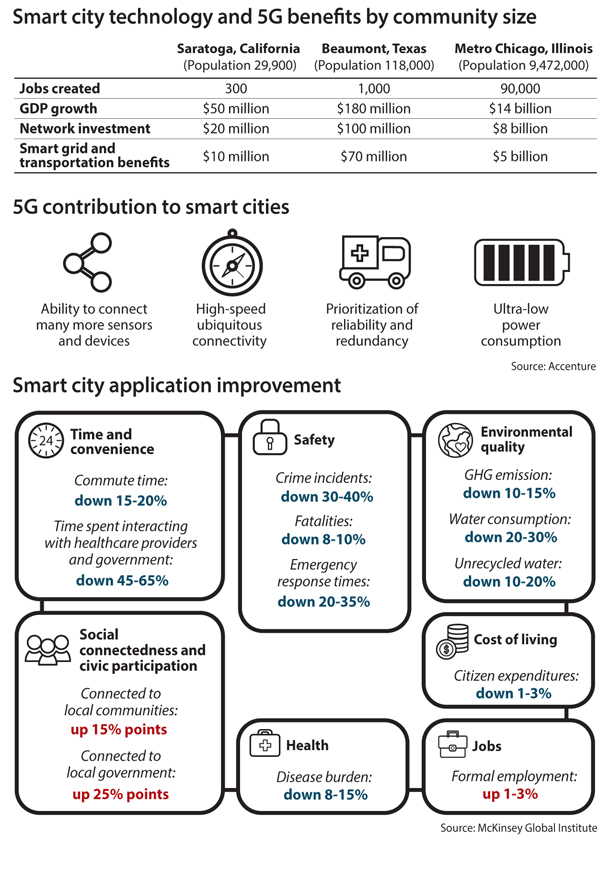 “We are the first in the world to adopt laws related to smart cities,” President Moon said during an event held in Busan. “As we live in an era where life without the internet and smartphones is unimaginable, smart cities will soon change our lives.”

The smart city test beds are part of the Moon government’s grand scheme, announced in June 2018, in which it selected smart cities as one of the eight innovative growth engines along with smart factories, smart farms, drones, biohealth, future cars, new energy and fintech.

The Ministry of Land, Infrastructure and Transport announced that the government will be investing a total of 9.58 trillion won in smart cities over the next 10 years.

“A smart city needs all three - services, platforms and networks,” said Nam Duk-young, LG U+ industrial IoT and smart cities general manager. “A smart city project becomes unstable when even one of these factors is missing.”

He said only when all three - services, platforms and networks - are connected and data from these connections are accumulated will value-added be created.

Basically, the quality and the capability of 5G connectivity is crucial to the success of a smart city. And smart cities are, in fact, 5G’s biggest application.

This is not the first time that the Korean government had a grand plan of incorporating technology in creating future cities.

In 2006, the Lee Myung-bak administration announced U-City, which pursued a similar concept in order to improve the city’s quality of life, public safety, efficiency and convenience. The government started to push the U-City project by passing legislation in 2008 for the building of the appropriate infrastructure.

A report by the Institute of Construction & Environmental Engineering said the biggest difference between U-City and smart cities is the focus. U-City is focused on the means, such as the infrastructure, while smart cities focus on the purpose, which is the services.

The former is centered on creating infrastructure necessary for the informatization by converging the city with IT. Smart cities, on the other hand, focus on utilizing the infrastructure to provide services that are customized for individuals.

It said past cities were managed by a small group of institutions that did not share information. But in the case of smart cities, the city itself is one connected platform that allows individuals to access information and data accordingly to their needs.

Korea was the first in the world to commercialize 5G. And since then, 20 telecommunication companies from 11 countries, including the United States, Britain, Switzerland, Spain and Australia, have introduced their own commericalized 5G connectivity.

However, Korea still has the fastest-growing 5G network. In just 69 days, one million subscriptions were added. This is faster than the 77 days it took to reach 500,000 subscriptions when LTE was introduced. The market estimates that by the end of this year, 5G subscriptions will reach five million.

5G connectivity is about more than simply allowing you to download content at a faster rate than the LTE network on your smartphone, or about dancing with your favorite band member through virtual reality or augmented reality services.

5G connectivity is expected to change our life beyond laptops and smartphones, as it will allow everything that hasn’t been connected to be connected seamlessly and wirelessly, including cars, homes, businesses and public utilities.

Public utilities, such as power generation, public lighting and water and sewage services, will be controlled more accurately and efficiently. Public safety will be enhanced, which could also lower social costs. This includes natural disaster relief, such as flood control and sending information on patients real-time to medical professionals.

Stamford, Connecticut-basedGartner projects that by next year, 20 billion IoT devices will be installed globally. Fast, secure and seamless transmission of high-quality data is only possible with the 5G network, which allows the setup of exclusive virtual networks, where specific services and data can be processed.

The 4G network struggles with mass connectivity, whereas in 5G, data can be collected effortlessly.

“[For smart cities to work] data that has been accumulated should be transmitted back and forth,” said Bae Sung-ho, director of urban economy at the Land Ministry. “Now we can transfer the information collected from IoT sensors to our network.

“While 5G can’t do everything, with emergency health care, all available information should be transmitted to the ambulance quickly.”

So why is the government obsessed with smart cities?

Cities today are faced with a significant problem as more people are drawn to them.

“Today, 84 percent of the population of Korea live in cities, which far exceeds the world average of 54 percent,” said Cho of Gacheon University. “By 2030, roughly 1.1 billion people will be drawn to cities [around the world] and as this urbanization progresses rapidly, people living in cities will not be satisfied with their lives.”

Other advanced countries, like the United States and Britain, have an 80 percent urbanization rate, while Japan’s rate is more than 90 percent, according to a UN report.

Kim Do-nyun, architecture professor and head of the Smart Green City Lab at SungKyunKwan University, said smart cities should be used to solving urban problems resulting from the growing number of urban residents, such as lack of parking spaces and pollution resulting from the increase in trash.

According to Accenture, $160 billion of benefits and savings will be generated when smart-city solutions are applied, as they will not only solve traffic congestion but also save in fuel costs and lower energy usage.

“5G has the ability to help cities do more with the same budget,” Jefferson Wang, managing director at Accenture Strategy, said.

Accenture estimated that when 5G is incorporated in smart cities, it will create roughly 90,000 jobs in cities with 9.5 million people. Seoul has a population of 10 million.

KT’s Economics and Management Research Institute said by 2025 at least 600 billion won worth of value will be created when 5G is incorporated in smart-city technologies.

But it’s more than just economics. McKinsey Global Institute estimates that with higher efficiency and faster response, cities of 5 million people will save 30 to 300 lives a year while reducing crime 30 to 40 percent. The disease burden will fall 8 to 15 percent and emergency response times will fall by 20 to 35 percent.

“We also find that using the current generation of smart city applications effectively could help cities make significant or moderate progress toward meeting 70 percent of the Sustainable Development Goals,” the report by McKinsey states.

The Moon administration a week ago laid out a more ambitious goal. It is not only creating smart cities here on the Peninsula but also plans to export the technology and expertise.

The Korean Ministry of Land, Infrastructure and Transport on July 8 announced plans to invest 500 billion won into overseas smart-city projects, efforts which could be one of the future growth engines.

The investment is part of a 1.5 trillion won Global Plant, Infrastructure and Smart City (PIS) fund that the government plans to raise. The ministry said it has already raised 600 billion won for the PIS fund.

The government is hoping to secure a 26 trillion won smart city development project in Kuwait.

In May 2016, Korea and Kuwait signed an agreement in which the Korean Land and Housing Corp. (LH) will provide a master plan and execution direction on the South Saad Al-Abdullah New Town project, which is located 30 kilometers west of Kuwaiti City.

Kuwait isn’t the only Middle East country which is a target for the export of smart cities.

The Saudi government is planning to create Neom, the Middle East’s own smart city, which will be located in the northwest of the country near the Red Sea and cover a total area of 26,500 square kilometers (6.5 million acres). The project will costs an estimated $500 billion.

Korea has a technological lead, as it is one of the highest-ranking countries in terms of smart city technologies. According to the McKinsey’s report, Korea is only behind Singapore in the Asia-Pacific region. Where 37 points is a percent score, Korea ranks second with 24.3, only 0.7 points behind Singapore and ahead of third-place Shanghai, with 20.5. Tokyo on the other hand is way behind, with 14.8, 1 points. Even Korea is shoulder-to-shoulder with places like New York, which took top the spot ahead of San Francisco, in the North American cities, and even Stockholm, which ranks top in Europe.

“Among the cities with the most advanced technology bases are Singapore, New York, Seoul, Stockholm and Amsterdam. All have ultra-high-speed communication networks and are in the process of launching 5G services. Seoul, for example, has some of the fastest internet speeds in the world and an extensive LPWA network. These cities have also expanded their sensor base beyond what most of their global peers have achieved,” the report states.

But some say more tests should be undertaken.

“I think more advanced telecommunication infrastructure needs to be tested,” said Kim Kab-sung, an urban planning and engineering professor at Yonsei University. “Already at our school, there’s a 6G research center, which is evolving to create new services, although it is still at a testing stage.”

He said in the future city planning will apply the appropriate communication models after planning.

“It needs massive data processing,” Yoo said. “A single car when traveling for a full day, needs 4 terabytes in communications between vehicles and also with infrastructure. A total of 20 terabytes are needed to monitoring illegal parking videos. We need to set up leading infrastructure first.”