Ryu scattered four hits and struck out seven in the Dodgers’ 2-1 victory at Dodger Stadium in Los Angeles, while lowering his major league-leading ERA to 1.76. 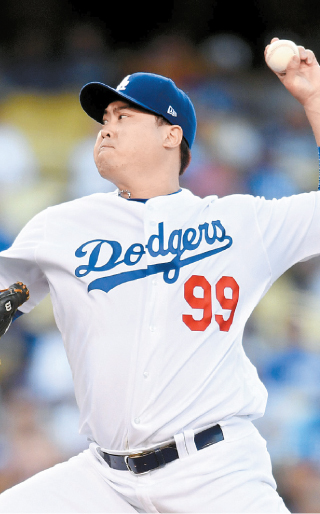 Ryu Hyun-jin of the Los Angeles Dodgers pitches against the Miami Marlins at Dodger Stadium on Friday. [AFP/YONHAP]

Ryu tied his season-high with three walks and also hit a batter for only the second time in 2019, before getting lifted for pinch hitter David Freese in the bottom seventh.

Ryu made 102 pitches, 61 of them for strikes, and worked around two errors by the defense behind him.

The first of the two errors came with one out in the top of the first by first baseman Joc Pederson, but Ryu closed out the inning with a double play ball off the bat of Garrett Cooper.

Ryu struck out the first two batters of the second inning, but loaded the bases with a pair of walks sandwiching a single.

This was the first time this year that Ryu has walked more than one batter in the same inning.

He wiggled out of trouble by getting Zac Gallen, the opposing pitcher, to ground out back to the mound.

Ryu walked Miguel Rojas on four pitches to open the third, but Curtis Granderson lined into a double play. Cooper hit a two-out double but was stranded at second when Brian Anderson popped out to catcher.

The Marlins finally got a run off Ryu in the fourth with Jorge Alfaro’s one-out double that cashed in Harold Ramirez, who’d reached on an infield single.

The Marlins put men at second and third with two outs in the same inning, but Ryu got Rojas to ground out to second.

Ryu had his first three-up, three-down inning in the fifth, and he pitched around a Corey Seager error to keep the Marlins off the board.

Ryu struck out the side in the seventh, his final inning of work.

The Dodgers got both of their runs in the sixth, with Justin Turner scoring the go-ahead run on an error by second baseman Starlin Castro.

Kenta Maeda, normally a starter, was called in to pitch the eighth inning to get some work, and he struck out two in the perfect inning.

Closer Kenley Jansen slammed the door shut at the end of the game by striking out all three batters in the ninth.