The largest auto parts maker in Korea announced in a statement Sunday that the new system, comprised of a set of cameras and monitors, will replace the side-view mirror to improve safety, efficiency and design. 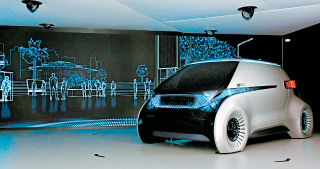 The system’s monitors are to be installed on the side of the steering wheel, above the right vent for the passenger seat and in the spot where the rear-view mirror used to be. The screens will display a real-time view from camera sensors installed around the vehicle.

As the camera monitoring system provides more than twice the view of the side-view mirror, drivers can drive more safely without blind spots. The new system’s field of view is around 35 degrees, significantly greater than 17 degrees that regular side-view mirrors offer.

The system-equipped vehicles will also consume less fuel and make less noise thanks to fewer protruding areas. Unexpected noises from wind normally caused by side-view mirrors will be gone with the new system, which will also reduce air resistance and thereby enhance performance.

The auto parts maker affiliated with Hyundai Motor and Kia Motors said it expects its new system to bring more freedom of design for automakers as they would be able to use the space that used to house the side-view mirrors.

The new system has proven to be reliable after being tested to function normally under severe weather conditions, the auto parts maker added.

Hyundai Mobis believes its new system will help it gain a competitive edge in the growing global camera monitoring market. IHS Markit projected the global demand for the camera monitoring system to reach 200,000 units by 2023.

The company recently announced that it developed a high-tech forward collision avoidance system that would be installed in middle and large-sized commercial vehicles starting 2021.