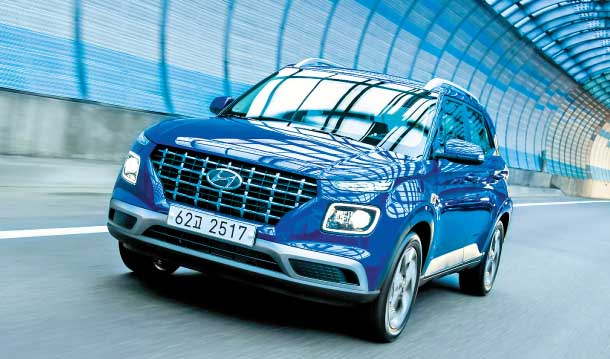 As people in their 20s and early 30s land their first jobs and move away from their parents for the first time, Hyundai Motor suggests that the Venue could be a solid option for their first ride.

“We developed the Venue in the hope that it would be a companion for those enjoying the single life,” said Hyundai Motor Executive Vice President Lee Kwang-guk during a press event held in Yongin, Gyeonggi, on July 11, adding that the compact SUV was specifically designed and manufactured for those living alone.

As Lee said, the Venue could be appealing to those who live alone as the model comes with competitive price range and appealing exterior design. But even considering the price point, the disappointing performance and cheapish interior features could make many independent young drivers reconsider purchasing the car. 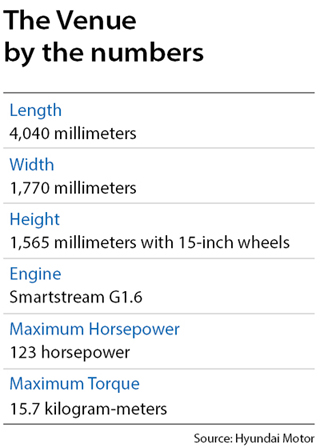 Looking at the Venue, the car does immediately deliver on its promise to appear more expensive that it actually is. With cascading grille, a signature feature of Hyundai’s SUV family and multipiece headlamps, the compact SUV brings a rather luxurious and majestic touch, yet the car is only is priced between 16.2 million won ($13,766) and 21.11 million won.

Looking at the back of the car, it was clear that Hyundai tried to focus on simplicity in contrast to the meticulous detail at the front. The rectangular tail lights were clearly not designed to stand out, but also not so ugly as to ruin the vehicle’s aesthetic.

The saying goes that a person should not judge a book by its cover, and the same case goes for Venue. Sadly, in this case, the cover is much more impressive than the rest of the book.

During a 150 kilometer-long (93.2 miles) round-trip test drive from Yongin to Yeoju, Gyeonggi, the mid-trim Venue’s on-the-road performance and interior features failed to live up to the expectations this reporter had when looking around and taking photos of the model’s outer design.

Inside, the Venue felt like a car that I would not have been too happy to invite others to sit in. The stitching and fabrics used for the dashboard and seats made it clear the Venue was a cheaper car, making me wish there were more customizable options available to upgrade the tacky interior design.

Soon after stepping into the driver’s seat, it was clear that this reporter, a 1.67 meter-tall (5 feet 6 inches) man, would have to find a new driving position in the Venue, as the vehicle was too tight to provide comfort. The Venue is 4.04 meters long but only 1.77 meters wide and 1.57 meters high.

On-the-road performance also proved to be an issue.

On the highway to Yeoju, the Venue started using its Smartstream G1.6 engine, which allows the model to boast up to 15.7 kilogram-meters (113 pound-feet) in torque and up to 123 horsepower. The SUV moved fast and was responsive enough.

But it wasn’t stable. Although the speedometer indicated that the Venue could fly at a speed of more than 200 kilometers per hour (124.27 miles per hour), it was clear that should never be the case, as the car started to tremble and act a little shaky with disturbing sounds when skidding at more than 120 kilometers per hour.

Driving over speed bumps was also not so pleasant. My head shook back and forth every time, and a reporter sitting next to me in the passenger seat glibly commented, “I have gone on better rides than this before.”

While the Venue was more shaky and sloppy than fast and furious, Hyundai certainly made its point in appealing to first-time car buyers. It was clear that safety was a huge priority for Hyundai in launching the compact SUV, as the automaker probably knew that first-time drivers are not necessarily professional racers.

The Venue’s automatic lane assist feature assured that the model would not easily allow inexperienced drivers to cause accidents.

Nearing the end of the course, I decided to let go of the steering wheel completely and keep my right foot on the pedal to see what the lane assist system could do. Surprisingly, the Venue stayed in the center of the lane and made turns by itself for about five minutes until I placed my hands back on the steering wheel.

It was also satisfying to see at the end of the test drive that the Venue’s trunk is larger than expected for a rather small four-wheeler. The 355-liter trunk is more than enough to sustain a single lifestyle, and shelves can be installed within the trunk for efficient storage.

Despite some weaknesses, the Venue could be an affordable option for those looking to flash out their first ride. The price level is a key advantage, and so is the safety system. But be prepared for an unpleasant driving experience and a cramped ride.

Overall, it’s clear there is a reason the Venue starts at 16.2 million won.