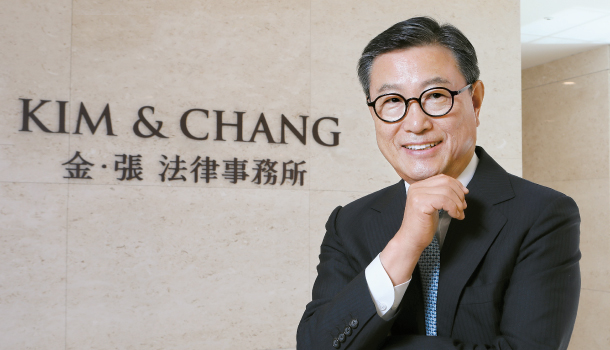 Chung Kye-sung, a managing partner of Kim & Chang, was the third lawyer to join the firm after the two co-founders. Now, he’s one of nearly 970, the highest number out of all Korean law firms. [PARK SANG-MOON]

There were only two lawyers at Kim & Chang when Chung Kye-sung joined the firm in 1976: Founders Kim Young-moo and Chang Soo-kil, whose names were on the shingle.

Today, Chung is one of nearly 970, the highest number out of all Korean law firms.

A Korean law firm that opened its doors in 1973 with big dreams to offer corporate counseling like law firms in the West is today the largest firm in a highly competitive domestic legal market, known for setting new limits on how far a Korean law firm can go.

Kim & Chang was ranked 67th in The American Lawyer’s list of Global Top 100 last year, the only Korean law firm to have made the list. Chung, who now serves as a managing partner, says it was a remarkable ride watching Kim & Chang grow with the Korean economy over the decades. As Korean companies expand their businesses well beyond the borders, so will his firm, he stressed.

During a recent interview with the Korea JoongAng Daily at Kim & Chang’s office in Jongno District, central Seoul, Chung talked about the firm’s globalization strategy and how it plans to maintain the coveted top position in the Korean legal market.

Q. In which countries does Kim & Chang have offices outside Korea?

A. We opened an office in Hong Kong in March 2013 and another in Ho Chi Minh City, Vietnam, in June 2018 to provide customized and efficient services to our clients there.

At the Vietnam office, which has attorneys from Vietnam, Korea and other nations specializing in Vietnamese businesses, we offer extensive and in-depth legal advice suited for the Vietnamese market. We provide a wide range of legal services to Korean and foreign financial institutions and major corporations, including mergers and acquisitions (M&A), real estate and construction, banking and finance, human resources and labor, as well as compliance and arbitration. Recently, we worked on an acquisition of a Vietnamese bank by a Korean bank and an investment in a Vietnamese solar power project by a Korean company, as well as financing of a real estate project and dispute settlements for Korean companies in Vietnam.

For a law firm the size of Kim & Chang, two foreign offices sounds too few. Is there any special reason you’re not opening more foreign offices like other major Korean law firms?

A law firm’s competitiveness lies in whether it has the capacity to handle an international case and a system that allows effective collaboration with global law firms. Kim & Chang is focusing on its capacity and role to proactively respond to clients’ needs and provide convenient services to clients as a strong legal partner, based on the firm’s extensive network with leading law firms around the world.

Do you have any immediate plans to open a new office?

We’re carefully reviewing other regions such as emerging Asian markets.

What’s Kim & Chang’s greatest strength when it comes to globalization?

Our greatest strength, above all, is that our clients can receive instant support from top experts who are familiar with the laws, regulations and industries of any field, without the restraints of time or location. With years of experience, more than 1,500 experts who understand the specialties of Korean and foreign jurisdictions and have the ability to communicate globally, provide insightful solutions in more than 50 legal fields.

We think it’s time for Kim & Chang to play a leading role in becoming a global law firm not only in Korea but also in the entire global legal market. Over the past decades, our law firm has been recognized by legal industry insiders for introducing an advanced legal system to the Korean legal market and for opening a new chapter in Korea’s history of law firms with a specialized, “one-stop” service, which today, has become something of a standard for all Korean law firms. We hope to continue this success across borders in the future.

Kim & Chang is known for having a really strong international arbitration team. What’s a major case the team recently dealt with?

We can talk about a recent arbitration case in the International Chamber of Commerce (ICC), in which Kim & Chang defended a Korean heavy industry company that constructed an underwater pipe installation in Qatar from 2011 to 2012 for a Qatari company. In March 2018, the Qatari company filed a request to the ICC for arbitration against the Korean company to pay $2.6 billion over a dispute regarding certain welding defects in the pipelines built by the Korean company. The plaintiff later upped the amount to $8 billion, which was the largest amount in an international arbitration case brought up against a Korean company. Our international arbitration team at Kim & Chang formed a partnership with a U.S. law firm to defend the client.

Various technical issues related to the design and construction of the underwater pipe installation arose as an issue. The arbitration team was made up of U.S. attorneys and patent attorneys with an engineering background, so they were responsible for reviewing the technical details and gathering opinions from various foreign experts. Many key witnesses were dispersed all over the world, including in the United Arab Emirates, Thailand and India. Luckily, we managed to reach out to them to verify the truth, and collected facts favorable to our client.

As a result of these efforts, our client successfully reached a settlement last May to pay around $222 million, which the company had already set aside for damage provisions.

How is Kim & Chang different from when you joined in 1976?

What started off as a tiny office with just two attorneys in 1973 grew into Korea’s best law firm over the past decades. Through the years, Kim & Chang stuck to its original goal of striving to become an advanced law firm. We’ve grown so much in 46 years, and I think more positive change and innovation awaits us in the future. It’s remarkable that I witnessed the growth of both Kim & Chang and the Korean economy, from the point I joined the law firm as an associate lawyer to now, as a managing partner.

For many lawyers participating in this year’s IBA annual conference, it will be their first time coming to Korea and Seoul. As Korea’s leading law firm, Kim & Chang is currently cooperating with the Korean Bar Association and the IBA to provide the best experience of Korea to our guests from all over the world. We will be hosting a large reception, where we will meet and greet our global colleagues, and we also plan to meet many law firms during IBA functions at Coex [in Gangnam District, southern Seoul] and smaller-scale events for more in-depth discussions on how we can collaborate to enhance legal services to our clients. Additionally, our lawyers at Kim & Chang will be actively participating in the IBA conference’s panel discussions to share their experiences and expertise with participants.