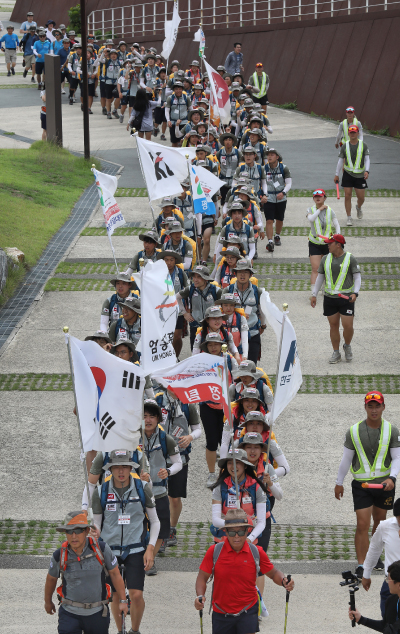 Eighty-six college students from across the country march toward Imjingak Pyeonghwa Nuri Park in Paju, Gyeonggi, last Saturday, on the final leg of their 308 kilometer-long (191 miles) journey along the inter-Korean border. For two weeks, they participated in the seventh DMZ Peace March, co-hosted by the Korea JoongAng Daily and the Um Hong Gil Human Foundation. [PARK SANG-MOON]

PAJU, Gyeonggi - Two weeks ago, Oh Hyeon-ji, 21, volunteered to march nearly 200 miles along the inter-Korean border in the scorching heat. She wanted one last chance to test her limits before graduating from college and entering adulthood.

After spending 14 days with like-minded university students from across the country, Oh, who is also majoring in emergency medical technology at Kangwon National University in Gangwon, realized anything is possible with a bit of teamwork.

“It was really tough and there were many moments I just wanted to throw in the towel,” Oh said last Saturday in Paju, Gyeonggi, as she celebrated the final leg of her journey at Imjingak Pyeonghwa Nuri Park. “I’m so thankful for all my friends who helped me along the way.”

People walk hundreds of miles and sleep in tents in these trekking programs, or “a long walk across the country” as they call it in Korea. These programs are popular among college students on summer break who want to break out of their comfort zones and toughen up for life after graduating from college.

But one thing that set Oh’s program apart from others was that she had to walk along the demilitarized zone (DMZ), which, despite its name, is one of the most heavily militarized borders in the world. The person leading Oh’s group was Um Hong-gil, Korea’s most revered mountaineer, who in 2007, became the first person to climb the 16 highest peaks in the Himalayas.

Um, who founded the Um Hong Gil Human Foundation in 2008, kicked off the annual DMZ Peace March in 2013 in hopes of helping Korea’s youth take on new challenges and gain a better understanding of the divided peninsula. This year’s event was co-hosted by the foundation and the Korea JoongAng Daily.

Ninety university students were selected from nearly 200 applicants to join Um in this year’s DMZ Peace March, which began on July 7 in Goseong County, Gangwon, near the east coast of the country, and wrapped up last Saturday in Paju, near the west coast.

A total of 86 students completed the entire journey, which stretched 308 kilometers (191 miles). One member gave up mid-way, one was forced to leave after getting caught smoking and two were advised by medical assistants to quit due to their deteriorating health conditions. 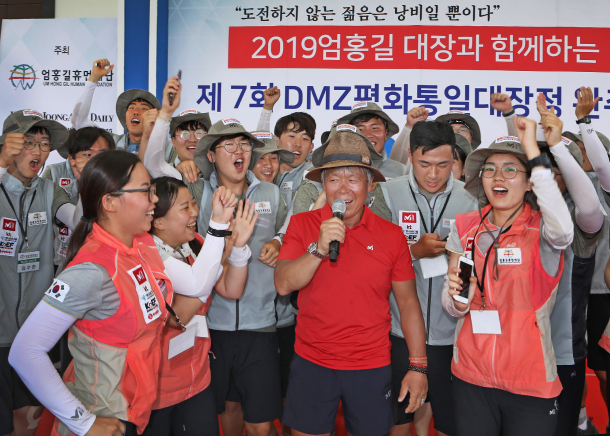 Um Hong-gil, center, Korea’s most renowned mountaineer, celebrates the end of the seventh DMZ Peace March last Saturday in Paju, Gyeonggi, with 86 university students who joined him in the 308 kilometer-long (191 miles) march along the inter-Korean border for two weeks from July 7. This year’s DMZ Peace March was co-hosted by the Korea JoongAng Daily and the Um Hong Gil Human Foundation. [PARK SANG-MOON]

Left, two participants chosen as this year’s best DMZ Peace March members smile after receiving their awards during a closing ceremony last Saturday at Imjingak Pyeonghwa Nuri Park in Paju, Gyeonggi, the final leg of the DMZ Peace March. Right, a male participant in the crowd wears a hat adorned with his teammates’ signatures during the ceremony. [PARK SANG-MOON] 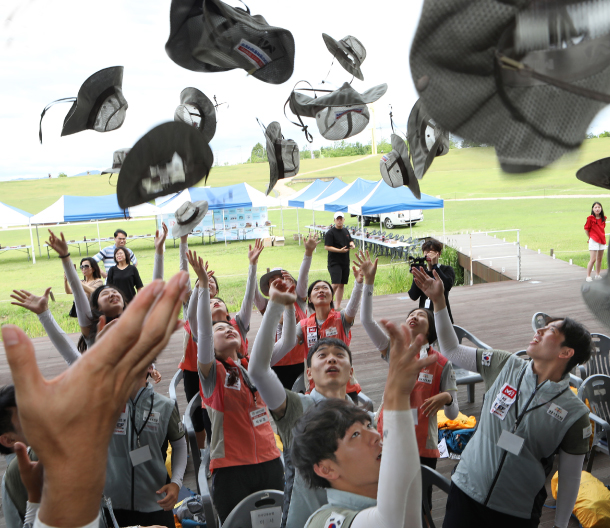 Participants throw their hats into the air after the closing ceremony to celebrate the end of their journey. [PARK SANG-MOON] 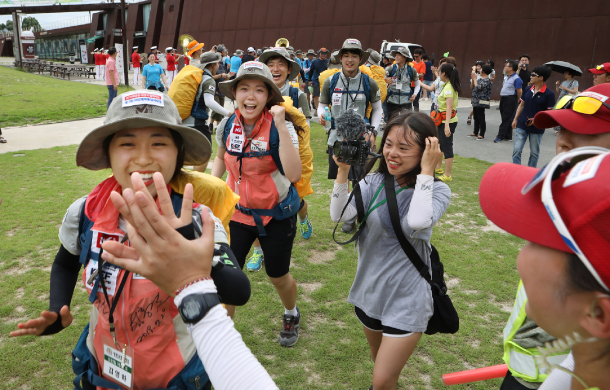 Members of the DMZ Peace March share high-fives with their assistants as they arrive at Imjingak Pyeonghwa Nuri Park in Paju, Gyeonggi. [PARK SANG-MOON] 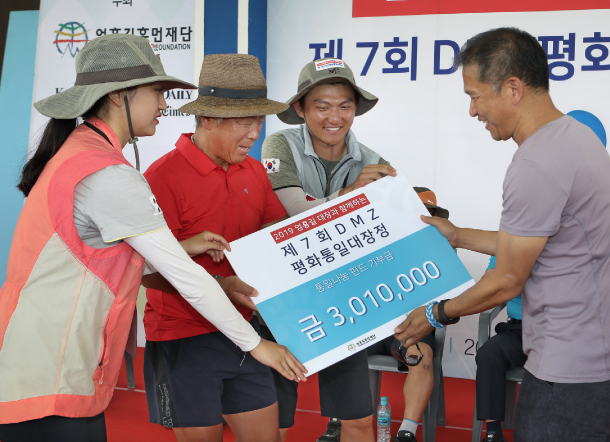 Um Hong-gil, second from left, and student members of the DMZ Peace March check how much they raised during the closing ceremony before donating the money to UniKorea Foundation, a local nonprofit organization aimed at enhancing inter-Korean reunification. They raised over 3 million won (＄2,550). [PARK SANG-MOON]

Members of the DMZ Peace March, their assistants and other guests gather on stage at Imjingak Pyeonghwa Nuri Park in Paju, Gyeonggi, after wrapping up their march and closing ceremony. [PARK SANG-MOON]

On Saturday as the group arrived at Imjingak Pyeonghwa Nuri Park for their closing ceremony, loud, confident cheers and a sense of relief filled the air as they accomplished the gruesome march.

“I really hope that the day will come when young South Koreans march with North Koreans from the south of the peninsula to the north, from Mount Halla to Mount Paektu,” Um said in his closing remarks, referring to the popular South Korean mountain on Jeju Island and the majestic mountain on the northern tip of North Korea.

Shin Hwa-gyeong, 22, a senior majoring in food and nutrition at Dongduk Women’s University in central Seoul, said she realized she was living in a divided country when soldiers accompanied her during several sections of the DMZ Peace March.

“Soldiers always followed us when he had to pass through areas that were off limit to civilians,” said Shin. “That’s when I thought to myself, ‘Wow, Korea really is a divided county.’”

Oh said she had second thoughts about North Korea and inter-Korean reunification after seeing North Korean soldiers through a telescope at an observation pavilion.

“I was negative about North Korea before joining the program because I didn’t like its military provocations against us,” Oh said. “But after seeing North Korean soldiers, I realized we’re the same.”