Lee echoed the words of Choi Jong-ku, who announced his resignation just last week, saying he decided to step down before a major cabinet reshuffle planned by the Moon Jae-in administration.

“The Moon administration is preparing for a large cabinet reshuffle,” Lee said. “In the hope of being supportive of the new cabinet, I delivered my will to resign to the president.” 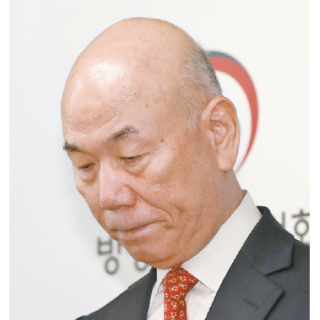 Lee scheduled a press briefing with reporters Monday to share the results of his second year at the Korea Communications Commission, but suddenly changed the time of the briefing from 3 p.m. to 11 a.m. that day and announced his resignation.

Lee, a progressive media scholar who was appointed to his post in August 2017, still had a year left in his term due to end next August.

While he didn’t say much about why he is leaving now apart from briefly mentioning the expected cabinet reshuffle, he said it’s a pity that there is still not a single command center for broadcasting and telecommunications policies in Korea.

There are, however, still controversies over whether the two roles should be managed by a single institution, and also which of the two bodies should have that authority.

During his term, Lee and the commission focused on ensuring a fair playing field for local and foreign internet companies.

The commission said it will continue to look into regulations that only apply to Korean companies and make guidelines to ultimately figure issues related to network usage fees, in a statement Monday.