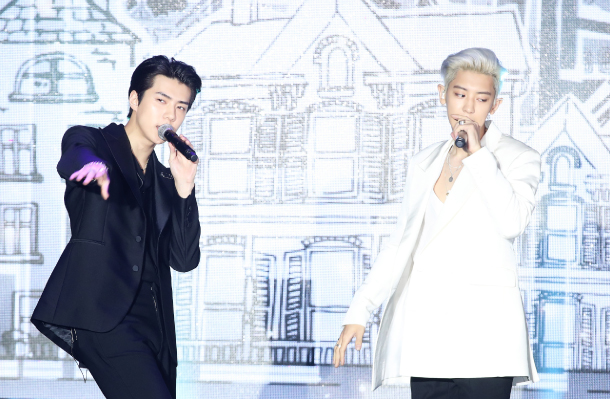 Exo-SC, a subunit of boy band Exo made up of members Sehun (left) and Chanyeol (right), perform “What A Life,” the title track off of their first EP on Monday at the Hongdae Muvhall in western Seoul. [YONHAP]

July has become the month of Exo. Less than two weeks after Exo’s very own Baekhyun released his single “UN Village” on July 10, Exo-SC, a subunit comprised of Sehun and Chanyeol, made their debut as a duo with their first six-track EP titled “What A Life” on Monday.

“I feel so honored to have been given the chance to do something like this,” said Sehun at a showcase held Monday afternoon at the Hongdae Muvhall, western Seoul. “When we were preparing for the album, we weren’t doing it lightly. We put so much effort into everything in the process. I hope people can feel that when they listen to our songs.”

“What A Life” marks the launch of the first duo subunit of the group, made up of Exo’s lead dancer Sehun and lead rapper Chanyeol.

Exo-SC released the music video for the lead track “Just Us 2” on Sunday as a surprise for fans prior to the release of the EP on Monday evening. The release has three lead tracks, including the title track: “What A Life,” “Just Us 2” and “Closer To You.”

“The reason we chose to release three songs was because we were initially going to go with just ‘What A Life,’ but then we decided we liked the other two too much to give up,” Sehun said.

Chanyeol added, “I wanted to release all six songs as the lead track, but that wasn’t possible. The three lead songs are very different from each other, so I hope you listen to them all and feel the different vibes.”

The title track “What A Life” is a cool laid-back hip-hop song in which the duo tells people that they should “play as hard as they work,” a message they want to tell listeners, but also a story about themselves. “We actually thought that this song should be the lead single from the moment we first heard it. I think it’s the story of us two. We want to have fun as much as we work, and share that positive energy with everyone else,” said Chanyeol.

“Hip-hop is a genre that I have wanted to try even before I made my debut with Exo,” he said. “I’m actually glad that I got to do it with Sehun. We get along well all of the other members, but the chemistry between myself and Sehun is especially great I think. I think hip-hop is the best genre for a duo. It allowed us to express our voices more comfortably and freely.”

Monday marked the beginning of Exo-SC, but the duo is already prepared to show more in the coming days, said member Chanyeol.

“We will be showing you various sides of ourselves, not limiting us to just one genre. We could even go beyond music, like fashion or performing arts. We’re open to everything. And because we’re in a position where we can influence people in different ways, we want to use music and other mediums to spread good.”

Sehun added, “We want to try a variety of genres as a duo. But what’s important is that we’re telling our story - something that we’ve always had in ourselves. We are going to show you what we have, our thoughts and the ideas that we’ve had within us.”