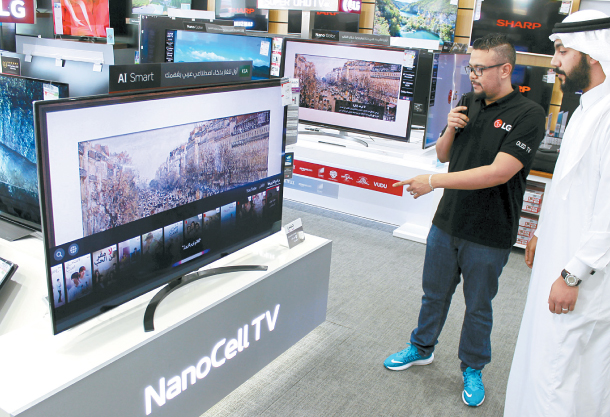 A customer is briefed on an LG TV that uses artificial intelligence to understand commands delivered in Arabic at a store in Saudi Arabia. [LG ELECTRONICS]

LG Electronics released a television that responds to voice commands in Arabic.

The LG OLED AI ThinQ and LG NanoCell AI ThinQ are the first products of its kind to support the language. They utilize an updated ThinQ software platform, the company said Monday.

ThinQ electronically connects the company’s appliances, allowing them to be controlled through voice commands. It learns from usage patterns.

The two models will be made available for sale in Saudi Arabia this month, followed by Iraq and Jordan later this year.

Users of these smart TVs will not have to push on buttons to control the television. They can give orders through a mic in the remote control.

Functions offered through the voice command are: searching for programs and information, receiving suggestions, changing channels and switching resolution and sound settings.

For example, it will understand phrases like “What’s the weather?” or “Find a kebab recipe” in Arabic.

LG plans to add more languages to ThinQ, with Thai, Vietnamese, Japanese and Swedish capabilities planned for the near future. The company says it will understand 15 languages by the end of the year.

LG has been increasing the number of markets it is targeting for TVs capable of processing natural language to 140 countries this year, which is double last year’s total.

LG has been pushing for upgraded functions on its appliances through the use of its ThinQ platform.

Apart from diversifying language, the company is engaging in partnerships with other IT firms in the market for its appliances.

Last year, it began incorporating Google Assistant functions into its high-end televisions, and it hopes to add Amazon’s voice assistant Alexa from this year. LG’s smart TVs would be the first in the product sector to offer both options.