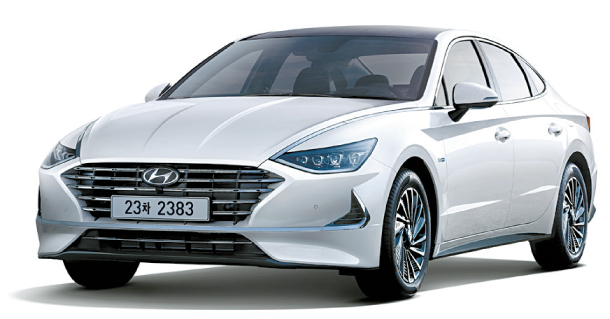 The largest domestic automaker by sales announced in a statement that the Sonata 2.0-liter gasoline hybrid model with six-speed automatic transmission is rated at 20.1 kilometers per liter (47 miles per gallon).

The hybrid model has a solar roof system that can generate enough electricity for the car to travel around 1,300 kilometers (808 miles) a year if charged six hours a day.

The modified version of the Sonata is also the first model with Hyundai Motor’s Active Shift Control system, which uses software to control the electric motor to align its rotational speeds more quickly. The automaker claims that the new system can reduce gear shift time by 30 percent.

The Sonata hybrid can achieve up to 19.2 kilogram-meters in torque and nearly 150 horsepower.

“The all-new Sonata is a vehicle born to evolve the mobility paradigm into a smart device,” Hyundai Motor said . “The Sonata hybrid will help the Sonata brand strengthen its place in the mid-sized sedan market while continuing the wind of change and innovation that the all-new Sonata brought to the market.”

In a bid to follow the digitalization trend of the auto industry, Hyundai Motor said it added a digital key system to the newest hybrid model. With near field communication technology, four people can share the car as drivers by using a smartphone application.

Before the hybrid version was released, Hyundai Motor sold 48,291 units of the all-new Sonata since releasing 2.0-liter gasoline and 2.0-liter liquefied natural gas versions to the domestic market in March. The Korean automaker aims to sell a total of 70,000 units by the end of the year.

The hybrid model, which comes in five different trims, is priced between 27.5 million won ($23,300) and 36 million won. Hyundai Motor is expected to launch the 1.6-liter turbo gasoline model of Sonata equipped with an eight-speed automatic transmission later this year.