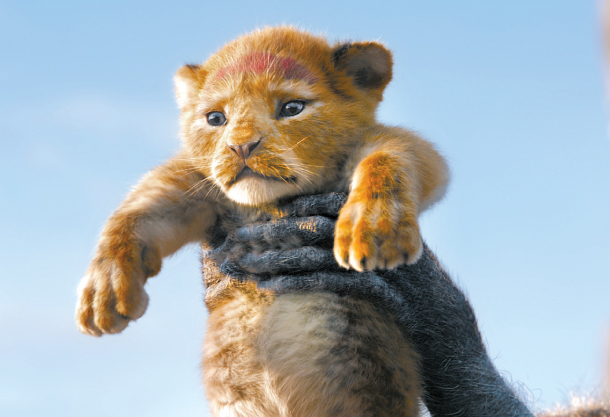 To nobody’s surprise, “The Lion King” triumphantly took the top spot at the weekend box office.

Disney fans flocked to their nearest theaters to see their beloved childhood animated characters come to life. The film sold 1.7 million tickets at 1,935 screens over the weekend according to the Korean Film Council. In total, 2.3 million moviegoers have seen the film since its release on Wednesday, setting a new record for Disney remakes. “Beauty and the Beast” (2017) took eight days to reach two million ticket sales, while “Aladdin” took 11 days to reach the mark.

The film takes fans to the Pride lands, where a young lion cub named Simba is full of hope and has dreams of becoming the king of the vast African savanna like his father, Mufasa. However, when his uncle Scar’s evil scheme leads to Mufasa’s death, Simba runs as far away from home as possible, thinking that his father’s death was his fault. He leads a happy and worry-free life with his new friends, Timon and Pumbaa, until he comes across Nala, his best friend from the Pride lands. After meeting her, Simba begins to realize that he must go back to his home to take his rightful place as king, even though it means facing his traumatic past.

“Aladdin” remained a steady draw at local cinemas, with almost 500,000 theatergoers seeing the film at 957 screens. The film officially became the most successful Disney remake by having reached more than 10.9 million tickets sold as of Sunday. 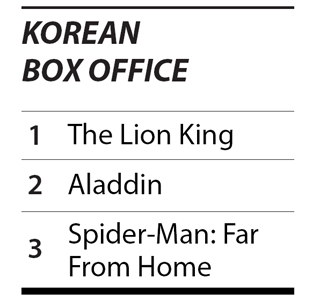 Director Bong Joon-ho’s “Parasite” clung to the edge of the box office charts, selling 33,000 tickets at 192 screens over the weekend. The Palme d’Or winner finally surpassed 10 million ticket sales over the weekend, achieving the feat 52 days after its premiere.

Overall, the weekend box office was swamped by Disney films, with three out of five top films distributed by the company.

Meanwhile, “Avengers: Endgame” officially became the most successful film ever by surpassing $2.7 billion in tickets sales in its 13th week in theaters globally, overthrowing “Avatar” (2007), which had held the record for 10 years.

The film’s success contributed to the total profits that Disney has made off of Marvel films, which is reported to be $18.2 billion. Out of Marvel’s 23 films, Disney has distributed 16.