‘The Divine Fury’ hopes to surpass expectations: Director Kim Ju-hwan aims to create his own cinematic universe with his latest film

‘The Divine Fury’ hopes to surpass expectations: Director Kim Ju-hwan aims to create his own cinematic universe with his latest film 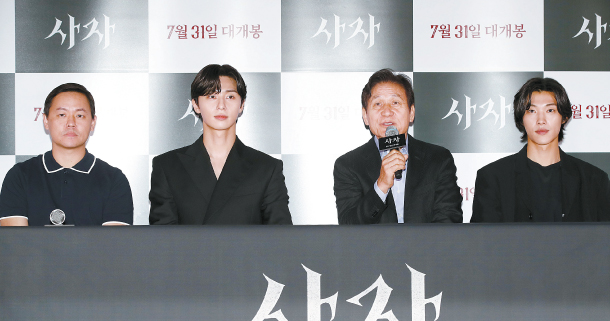 From left, director Kim Ju-hwan and actors Park Seo-jun, Ahn Sung-ki and Woo Do-hwan attend a press conference after the press screening of “The Divine Fury” in eastern Seoul. Kim hopes the film is the first part of his own cinematic universe. The film premieres on July 31. [YONHAP]

At a press conference in June, director Kim Ju-hwan told local media about his ambitious plan to kick off his own cinematic universe with his film “The Divine Fury.”

After a press screening on Monday, it was clear that the film’s exorcist hero Yong-hoo - who was handpicked by God to rid Earth of demons - has plenty more to take care.

Throughout the film, there are various hints that suggest the story may continue beyond one film, resolving the conflict just enough to give the characters room to breathe after fighting off evil.

While local moviegoers may see the movie as another occult film, the director seems to have gone to great lengths to add his own distinct voice to the film, mainly through the unique characters. Making Yong-hoo a boxing champion with a quick temper who transforms into an exorcist throughout the story allows the audience to relate to his conflicts and struggles in a way that may have been difficult to do if he had been an exorcist from the beginning.

By the time Yong-hoo is punching his way through people possessed by evil spirits, audiences will find themselves cheering him along as they’ve embarked on the emotional journey with him.

Actor Park Seo-jun admitted that the character’s strong physical power was one of the reasons why he said yes to the script. “I wanted to star in a hero film like the ones I see in foreign films,” Park said. “Before I got older, I wanted to try out action films, and that was when Kim gave me the script for ‘The Divine Fury.’ It was a new challenge that I was glad to take on.”

Another plus was the chemistry between actor Ahn Sung-ki and Park. “I’ve already worked with Kim, so I know how he shows his humor,” Park said. “I really do love those funny points [suggested by Kim], and although the genre was totally different, I thought the way Ahn and I played our roles so seriously could be comical from a third-person perspective.”

Ahn plays another veteran exorcist that guides Yong-hoo. “The character was full of tension because he needed to be ready at all times to fight off demons, but I am relieved that the audience today seemed to enjoy the relationship between Yong-hoo and [my character],” he said after the press screening.

The director also spoke of his correspondence with Francis Lawrence, the director of “Constantine.” A longtime fan of Lawrence’s films, the film’s distribution company Lotte Entertainment set up a meeting for the directors to discuss Kim’s film. According to Kim, Lawrence was impressed by the quality of the film, especially after learning about the relatively low budget. Above all, however, the director emphasized that the film was focused on the dramatic development of Yong-hoo, who was chosen by supernatural forces to fight off evil.

“Before trying to break the stereotypes [of exorcist films], I tried to think of the basic structure of good and evil, and depict the film as a story based on our own narratives, even though the majority of the concepts originated from the Bible and various myths.”

However, the film faced criticism due to its lack of female characters. His prior film, “Midnight Runners” (2017) also faced similar reviews as the female characters were mostly cast aside by the heroic acts of the two male heroes and were ultimately needed to be rescued. However, Kim saw the issue differently.

“I am still studying to create a good female character,” he said. “However, [for this role], I believed that the character was more suitable for male actors.” The director hastily added that he was thinking of adding more female leads as he develops the series further.

Although a surprise appearance by actor Choi Woo-shik was leaked prior to the screening, Choi’s role turned out to be bigger than the cameo that was expected.

“We really do want to continue the story with Choi if we are able to earn the approval from the audience,” Kim said. “The crew and I will always be ready to create another film in this cinematic universe.”