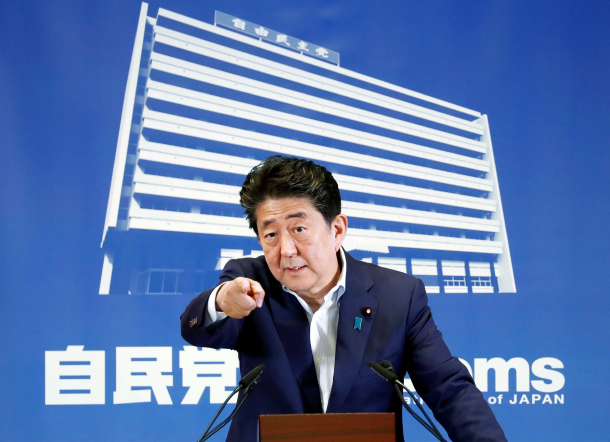 Japanese Prime Minister Shinzo Abe, who is also the leader of the ruling Liberal Democratic Party (LDP), speaks at a news conference at the LDP headquarters in Tokyo on Monday a day after an upper house election. [REUTERS/YONHAP]

Despite his ruling coalition winning the majority in the upper house in the Sunday national elections, Japanese Prime Minister Shinzo Abe fell short of his ambitions to secure enough seats to revise Japan’s pacifist constitution.

However, Abe appears to be adhering to a hawkish stance on Seoul as diplomatic friction continues over Japan’s unilateral implementation of export restrictions on three high-tech materials to Korea since July 4, amid a dispute over the issue of wartime forced labor.

In a press conference on the results of the upper house elections in Tokyo on Monday, Abe said that the “biggest problem in Korea-Japan relations is the issue of whether a country keeps its promises or not,” adding that it was a matter of “trust.”

Abe alleged that Korea “unilaterally violated” the 1965 bilateral claims agreement and “did not keep promises made between the leaders of the two countries.”

Japan has been protesting against Korea’s Supreme Court decisions last year, which ordered Japanese companies to pay Korean victims of forced labor during World War II, recognizing the illegality of colonial rule and the victims’ rights to individual compensation. However, Japan claims a lack of “trust” and possible national security concerns as the official reasons for its recent export restrictions on Korea.

Abe in the press conference again denied the export restrictions were retaliatory measures and added that Seoul “broke international promises including the [2015] comfort women deal,” and that Japan would like “Korea to keep its promises first.”

The Abe administration has been criticized for whitewashing its wartime aggressions and brutal colonial rule including the Japanese military’s forceful recruitment of girls and young women into sexual slavery during World War II.

Korea and Japan on Dec. 28, 2015, aimed to resolve the wartime sexual slavery issue finally and irreversibly through a deal that included an apology from Tokyo and a 1 billion yen fund for the victims, which amounted to about $8.8 million at the time, a move which was protested by victims and civic groups.

The Moon Jae-in administration has called the deal, signed under the preceding Park Geun-hye government, “flawed” and last November said it will scrap a foundation launched in July 2016 to manage the fund from the Japanese government.

The diplomatic row between the neighboring nations escalated ahead of the elections Sunday.

Abe in an interview with Asahi TV Sunday said that Korea has to first “properly respond” on what he called a breach of a 1965 bilateral treaty that normalized relations between Seoul and Tokyo in order to hold a constructive dialogue on the diplomatic tensions. A Blue House spokesperson on Monday said that Korea has always promptly responded to Japan.

Tokyo last month rejected Seoul’s proposal for a joint fund comprised of voluntary contributions by Korea and Japanese companies to compensate the forced labor victims and diplomatic discussions to resolve the issue. Instead, Tokyo is calling for an arbitration panel involving a third-party. Japan maintains that the 1965 claims agreement, which included an economic cooperation fund, settled all compensation matters.

Seoul says it will respect the decision of its Supreme Court, citing the separation of the three powers as a democratic country, and is demanding Tokyo to withdraw its recent unilateral export restrictions.

Japan has threatened to take Korea off a so-called “white list” of countries with minimal export restrictions, and Abe’s remarks appear to indicate there won’t be a change in stance on the issue even after the upper house elections.

Abe is on track to become Japan’s longest-serving prime minister in November, with his party’s victory paving the way for him to run for office for a fourth consecutive term, which could put him in power through 2024.

Abe’s ruling Liberal Democratic Party (LDP) and its coalition partner Komeito hold the majority in both the upper and lower houses of Japan’s Diet, indicating that his administration will cement its power until at least 2021. The leader of the LDP-Komeito bloc can be expected to become prime minister. His current term as president of the LDP ends in September 2021.

Abe took office in December 2012, a political comeback after previously resigning from a one-year term as prime minister in September 2017 after his party suffered a humiliating defeat in an upper house election.

The LDP’s secretary general, Toshihiro Nikai, said in a radio interview Sunday that the people hope Abe will run for a fourth term.

While Abe has not yet publicly indicated intentions to run for another term, his supporters have advocated a change in a party rule to allow presidents to serve a fourth consecutive three-year term.

Japan’s constitution doesn’t limit the number of terms its prime ministers can serve.

The ruling coalition Sunday, however, fell short of securing a two-thirds majority in the 245-seat House of Councillors, the upper house of the Japanese Diet, which would have paved the way for Abe to push forward his ambitions to amend Japan’s peace constitution, which forever renounces war. Voter turnout was the second lowest in history for an upper house election at less than 49 percent.

Amending the constitution, implemented in 1947, would require approval of two-thirds of both the upper and lower houses of the Japanese Diet and a majority of voters in a public referendum.

Abe has sought to amend Article 9 of Japan’s postwar constitution, which stipulates that “the Japanese people forever renounce war as a sovereign right of the nation and the threat or use of force as a means of settling international disputes.”

His long envisioned revision to Japan’s postwar pacifist constitution to enable Japan to become a country that can wage war, would surely be protested by neighbors such as Korea and China, which hold painful memories of Japan’s invasions during World War II.

Failing to secure a supermajority is a setback to Abe’s vision to reform the constitution by next year. Not being able to complete his agenda by the end of his current term as prime minister could also spur him to try for a fourth consecutive term.

Now with Japan’s upper house elections out of the way, there is international attention on whether the diplomatic tensions can be prevented from deteriorating further. U.S. President Donald Trump has already indicated he will get involved in the dispute between Korea and Japan, and the World Trade Organization’s General Council is holding discussions on Japan’s export restrictions this week.

Bloomberg wrote in an editorial piece Monday entitled, “Abe’s Trade War With South Korea Is Hopeless” that victory in Japan’s upper house gives the prime minister “the political clout to do many things,” and that the “first should be to extricate Japan from the foolish trade war he’s launched against neighboring South Korea.”

The Bloomberg editorial further wrote Abe “is abusing trade measures to resolve a political dispute,” and that his move can be considered a “bullying” tactic and “hypocritical” for a leader who has championed “strengthening the global trading order.”

It went onto urge, “Having started this fight, and having safely survived the elections, Abe should make the first move.”