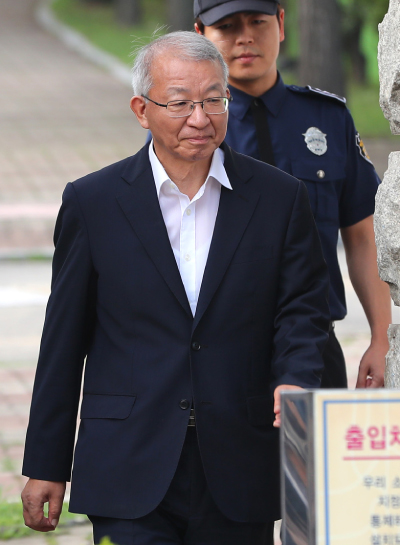 Former Supreme Court Chief Justice Yang Sung-tae was released on bail Monday, 179 days after he was detained on charges of interfering with trials to lobby officials in the previous conservative administration to support his plan to establish a separate court of appeals.

Yang, 71, is one of the most high-profile figures from the former Park Geun-hye administration to have been indicted by prosecutors. Last February, prosecutors indicted him on 47 counts of alleged crimes, most of which had to do with power abuse, loss of national property and leaking of state secrets.

The indictment was the first issued against a former head of the judiciary.

Yang was accused of having pressed his underlings in the National Court Administration, the Supreme Court’s governing body, to devise plans to influence politically sensitive trails for the former president.

The most prominent were two suits filed by former laborers against Japanese companies that forced them to work during World War II, which were allegedly indefinitely deferred by the Supreme Court to spare Park diplomatic problems with Japan. Another was the trial of a former spy chief accused of orchestrating a massive opinion rigging campaign in the 2012 presidential election in Park’s favor.

Yang is believed to have wanted the executive’s support in the establishment of a new appeals court in return. This could have reduced the immense workload of the Supreme Court as well as cement Yang’s own legacy as a successful chief justice.

Yang headed the Supreme Court from 2011 to 2017 during the former conservative administrations of Park and her predecessor, Lee Myung-bak.

On Monday, 20 days before his six-month detention warrant expires on Aug. 11, the Seoul Central District Court released Yang on a bail of 300 million won ($255,000), though under strict conditions.

Yang is only allowed to live in his house in Seongnam, Gyeonggi, and must not directly or indirectly make contact with anyone related to his trial, or make any attempt to flee or destroy evidence related to his allegations. Unless he informs the court in advance, Yang must appear when the court summons him, at the exact time and place he is ordered to show up. He must also receive permission from the court if he wants to leave the country or travel to another location within Korea for three days or more.

The court said Monday that if Yang breaks any of these rules, his bail will be forfeited and he could also face a fine of up to 10 million won or be physically detained for up to 20 days.

Sources at the Seoul Central District Court said the court offered Yang bail, as opposed to previously, when Yang asked the court in February for bail but was rejected. He had not asked for bail since.

The court gave no public explanation about its offer, but legal experts say they believe the bail was suggested in order to restrict Yang’s movements before his first trial, given that if he was released after completing his six-month detention period, he would face no restrictions.