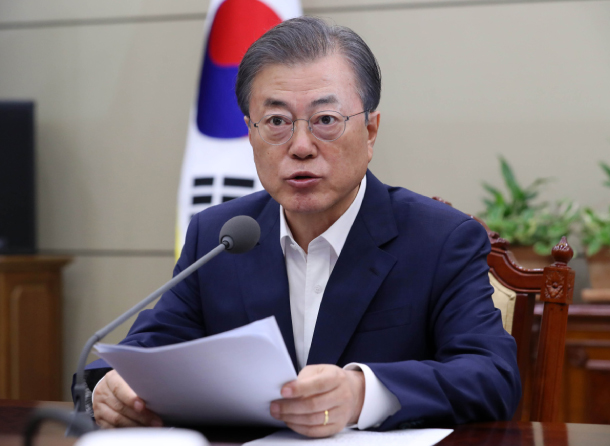 President Moon Jae-in delivers opening remarks ahead of a meeting with his aides at the Blue House on Monday. [KANG JUNG-HYUN]

President Moon Jae-in appealed to the public on Monday to work together to improve competitiveness in the component and material industries to overcome the supply crisis caused by Tokyo’s recent export restrictions.

“Global economic conditions have worsened, and Japan’s export restrictions have been added, and the people have many worries about our economy,” Moon said Monday. “The government is preparing short-term and fundamental resolutions as well as making efforts to find a diplomatic resolution.”

Moon then encouraged the nation to address the crisis by localizing the manufacturing of essential components and materials.

“We became aware that having the upper hand in industrial competitiveness is crucial in order to continue equal and mutually beneficial trade in a system that relies on international division of labor,” Moon said. “We have overtaken Japan’s absolute superiority in many industries, such as home appliances, electronics, semiconductors and shipbuilding, one after another. We can do it again.”

Moon made the remarks ahead of a weekly meeting of senior secretaries at the Blue House. He skipped the harsh rhetoric toward Japan this time, a change from almost daily messages condemning the neighboring country and its leaders throughout last week. Instead, he appealed to the public to counter Japan in cooperation with the government.

Noting the rapid increase in the number of new start-ups and continued investments in them despite the lowered economic growth rate projections, Moon vowed to push forward with administration policies concerning new technology firms.

“When the national economy is threatened by the technology hegemony that violates the free trade order, innovative new technologies can be an important resolution,” Moon said, criticizing Japan without mentioning it by name. He then said the government will stimulate innovation in the component and material industries in particular.

Moon urged the public to increase domestic consumption and take vacations at home in order to make up for the expected decline in growth due to slow exports. The appeal was made amid the Korean public’s snowballing boycott of Japanese products and tourist destinations in Japan.

While Moon has paused in his direct condemnations of Japan, the Blue House still warned Monday that Japanese Prime Minister Shinzo Abe must be cautious when he addresses the escalating diplomatic row between the two countries.

“He must stay in line,” Ko Min-jung, presidential spokeswoman, said Monday morning. “And he must make the best efforts for future cooperation of the two countries.”

Ko was reacting to the Japanese leader’s demand for a “proper” response from Korea in order for talks to be held on the escalating crisis. “I want to ask him if he thinks the Korean government had not responded properly until now,” Ko said. “We have always responded.”

Abe told the Asahi TV on Sunday evening that a “constructive discussion is only possible when Korea presents a proper response.” He also argued that Korea is violating the 1965 bilateral claims settlement agreement, adding that Korean forced labor victim demands for Japanese reparations are against the accord.

“We have repeatedly informed them of our position that a two-track approach must be used for Korea-Japan relations to separate the future from the past,” Ko said. “And our stance remains unchanged. We made diplomatic efforts in the past. We are still doing so now, and will do so in the future.” Ko pointed out that Abe has been flip-flopping on the justification for Tokyo’s export restrictions. “He said it was a security issue, and later changed to say it was a historical issue,” Ko said. “Then, he said it was a security issue, and today, he is saying it is a historical issue.”

The ruling Democratic Party (DP) also used strong words to criticize Japan and prepare the public for the upcoming crisis.

He said Japan is expected to exclude Korea at end of July or early August from the “white list” of countries qualified for strategic exports with minimal restrictions.

Rep. Choi Jae-sung, an ally of Moon who is heading the DP’s special committee to counter Japan’s economic retaliation, said Korea will respond in a “horizontal” manner if Japan takes Korea off the white list.

He, however, refused to elaborate what they are, although he said Korea won’t impose the same kinds of export restrictions.

“We have no intention to counter Japan with the same unfair measures that are unacceptable in the international community,” he said.

Later in the afternoon, the Foreign Affairs and Unification Committee of the National Assembly adopted a resolution urging Japan immediately rescind its retaliatory trade restrictions.

The lawmakers of the ruling and opposition parties unilaterally supported the resolution, which urged both Korea and Japan to initiate efforts to find a diplomatic resolution.