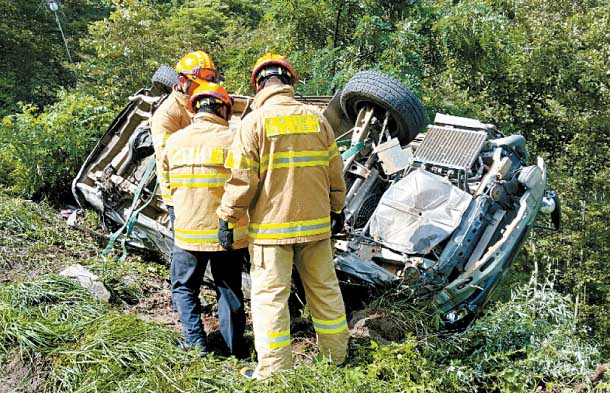 Firefighters check the overturned van which rammed into a guardrail and flipped over off the road in Samcheok, Gangwon, on Monday. [NEWS1]

Four people were killed after a van carrying mostly elderly women and foreign workers exceeding its maximum passenger capacity rammed into a guardrail and flipped over off a road in Samcheok, Gangwon, on Monday morning.

The van, a 15-person Hyundai Grace, was carrying 16 passengers including seven Korean women and nine foreign workers, some of whom are known to be Thai nationals.

The four dead include the van’s 61-year-old driver. Three others were severely wounded, while six sustained light injuries.

Police say three other foreign workers that were traveling in the van have gone missing. The passengers were all seasonal farm workers and some of the foreign workers are known to be illegal aliens.

Police suspect the driver lost control of the van when she had to turn right at a downhill road at around 7:33 a.m. The van scraped a wall on the side of the road for some 20 meters (65 feet) and crashed into a guardrail before going off the road and flipping over.

“I had my seat belt on, but the car started shaking and ‘boom,’ we suddenly crashed and I passed out,” said a 70-year-old passenger. “When I regained consciousness I crawled out of the car and saw that my colleagues were bleeding and screaming. It was chaos.”

“Gagok Village in Samcheok is famous as a place where many people farm onions,” said a police officer. “The van was said to have departed from Hongseong County in South Chungcheong on Monday at dawn and had been in transit for over five hours. We are still verifying whether the van carrying workhands who would tend vegetables grown in the highlands had already stopped by its final destination and was headed for someplace else in Samcheok, or whether Samcheok was its final destination.”

Although the car has a 15-passenger limit, police said the van did not violate the Enforcement Decree of the Road Traffic Act, which allows vehicles to carry up to 110 percent of its passenger capacity. Police suspect the accident was caused because the van was missing a rear wheel.

“We are also investigating the possibilities that the accident was caused by things like the driver’s negligence or a brake malfunction,” said a police officer.

A workforce of 32 people including police officers and firefighters responded to the accident with 10 vehicles including ambulances dispatched to the scene of the crash.