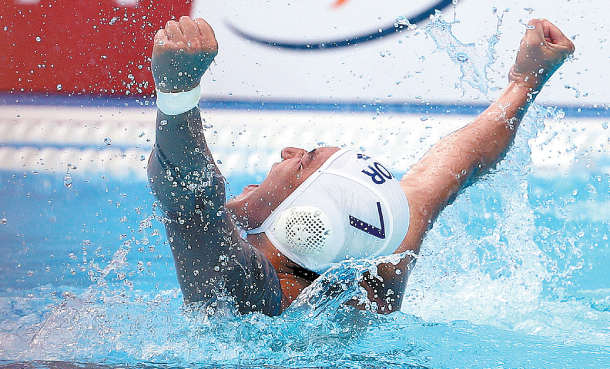 Korea defeated New Zealand 17-16 after a penalty shootout for its first World Championships victory in men’s water polo on Tuesday, prevailing in a tense battle to close out its campaign.

After the sides finished regulation tied at 12-12, Korea got the decisive shootout goal from Gwon Yeong-gyun, after goalkeeper Lee Jin-woo made a stop on the second Kiwi shooter, Nicholas Stankovich.

The nail-biting contest featured 11 lead changes, with neither team leading by more than one goal until late in the fourth quarter.

Korea had lost its four previous games, scoring 15 goals and allowing 89 but nearly matched that offensive output in regulation Tuesday before putting five more in during the shootout.

This was the first World Championships appearance for Korea, which received its spot as the host nation.

Korea was paired with three of the top-five teams from the 2017 worlds: Serbia, Montenegro and Greece. After dropping all three games as expected, Korea was relegated to the consolation bracket.

In the 13th to 16th place semifinals, Korea lost to Kazakhstan 17-4. The team finally appeared to have met its match in New Zealand, which scored 23 but allowed 67 in its four previous games. The Kiwis had finished in last place in five out of the six previous appearances and recorded just one win in that span.

Kim Dong-hyeok scored 57 seconds in to give Korea its first lead of the tournament. The teams traded goals to close the first quarter tied at 3-3, with Song Jae-hoon getting the tying goal with 1:33 left in the opening frame.

It was the first time that Korea didn’t lose a quarter all tournament, and the seesaw battle continued for the next two quarters.

Lee Seon-uk put Korea ahead for the second time 1:39 into the second quarter. At the other end, goalkeeper Lee Jin-woo made spectacular saves to stone Louise Clarke and Anton Sunde on successive possessions.

Sean Newcombe got one back for New Zealand with 81 seconds left in the first half, and the sides entered the second half tied up at 5-5.

Gwon Yeong-gyun broke the deadlock for Korea with a floating shot over goalkeeper Sid Dymond only 26 seconds into the third quarter.

Sean Bryant answered for New Zealand, only to be matched by Kim Moon-soo, who put Korea up 7-6 with 4:54 left in the frame.

Rowan Brown made it 7-7, and Lee Seong-gyu’s penalty shot put Korea back up 8-7.

Consecutive goals by Matthew Small and Matthew Lewis gave New Zealand a 9-8 lead, but Gwon Dae-yong evened the score for Korea with 47 ticks to go.

Lewis scored again with 4:48 left in the game to put New Zealand ahead 11-9. It was the first time all game that one side had led by more than one goal.

Gwon Yeong-gyun got one back 26 seconds later, and Lee Jin-woo denied Sean Bryant at the other end to keep it a tight affair at 11-10.

With 90 seconds remaining, Sean Newcombe scored the go-ahead goal on a fast break. Just when things looked dire, Gwon Yeong-gyun made it 12-12 with 32 seconds left.

Lee made a game-saving stop on Lewis with 13 seconds left, and Lee came up big again in the shootout.

With New Zealand shooting first, Lewis and Lee Seon-uk each converted their chances to start the extra session. Lee Jin-woo then delivered a clutch save on Stankovich, and the next four shooters scored for Korea to close out the victory.

Gwon Yeong-gyun led Korea with three goals, and six other players got on the board.